Obama’s Green Agenda Should Be Kept Out of National Security 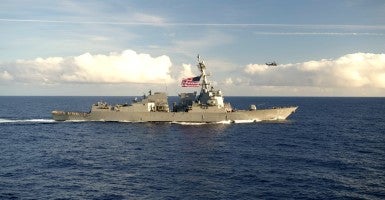 This week I will be offering an amendment to this year’s National Defense Authorization Act (NDAA) to prevent scarce defense dollars from being squandered on President Barack Obama’s executive orders regarding climate change.

These executive orders require the Department of Defense (DOD) to incorporate a host of climate change bureaucracies into its acquisition programs, logistics planning, and military plans and operations. The military is also required to help state and local governments “go green.”

These activities are simply not the mission of the U.S. military. They harm readiness rather than contribute to the lethality of our armed forces.

These activities are simply not the mission of the U.S. military. They harm readiness rather than contribute to the lethality of our armed forces. The military’s mission is to train for and fight our nation’s wars, not assist state and local governments with their carbon emissions levels.

For the past two years, the House Armed Services Committee has undertaken acquisition reform to eliminate paperwork and cut through the bureaucracy that inhibits our military’s ability to quickly obtain effective capabilities at a reasonable cost. Acquiring weapons systems is slow and burdensome enough; these non-defense mandates only undermine ongoing reform efforts.

Regarding the Department of Defense’s energy policy—decisions by installation commanders and DOD personnel need to be driven by requirements for actual cost-effectiveness and readiness, not arbitrary and inflexible green energy quotas and CO2 benchmarks.

There were at least 680 of such wasteful green energy projects as of 2013, most of which have not met the efficiencies or cost-effectiveness promised. Additionally, engineers and resources committed to green energy are diverting focus from deficiencies in our military’s critical infrastructure.

According to my colleague, Rep. Tom McClintock:

Under these “green energy” mandates, the Army and Navy have been required to install solar arrays at various facilities. At Naval Station Norfolk, the Navy spent $21 million to install a 10-acre solar array—which will supply a grand total of 2 percent of the base’s electricity.

According to the inspector general’s office, this project will save enough money to pay for itself in just 447 years.  (Of course, solar panels only last about 25 years).

In a time of declining military budgets, we in Congress need to deal seriously with exactly this kind of waste in order to make sure funds go directly toward the federal government’s primary responsibility of providing for the common defense and keeping Americans safe.

This commentary was updated to include attribution about the solar arrays.