If Congress Is to Rescue Puerto Rico, Key Conservative Has These Conditions 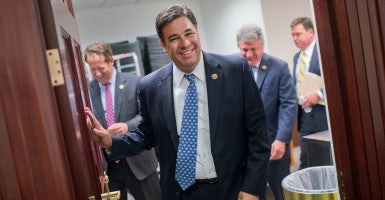 As the House struggles to find consensus on a plan to rescue Puerto Rico from its debt crisis, an influential conservative lawmaker today laid out his expectations for what legislation should look like.

Rep. Raúl Labrador, who is Puerto Rican, has been quiet about the plan being crafted by the Natural Resources Committee since he is a member of the panel and a direct participant in the negotiations.

But Labrador broke his silence before Capitol Hill reporters at the monthly Conversations with Conservatives event, declaring that any solution to Puerto Rico’s fiscal problems “cannot affect our states.”

“To me it’s pretty simple: Whatever we do on Puerto Rico cannot affect our states and cannot affect the way we are going to respond to any fiscal crisis in the future for any of the states,” said Labrador, R-Idaho, a founding member of a group of conservatives called the House Freedom Caucus.

Before he can endorse the bill, Labrador said, he wants assurances that it treats different classes of creditors fairly and doesn’t open the door for Congress to give authority to struggling states to restructure their debts.

Earlier this month, the Natural Resources Committee released a draft bill that would create an outside fiscal oversight board to manage a process by which Puerto Rico could restructure its $72 billion debt load.

>>>GOP Fights Over Whether Puerto Rico Rescue Plan Is a ‘Bailout’

The committee is revising the bill due to opposition from Republicans, the Treasury Department, and Democrats, and the legislation is not expected to be ready before May 1, when a $422 million debt payment by Puerto Rico is due. House leaders hope to act before a $2 billion payment comes due July 1.

Some holders of general obligation bonds whose debt payments are guaranteed by the Puerto Rican constitution have said they want to be exempted from the restructuring process facilitated by the proposed seven-member board.

Labrador said he doesn’t believe it’s “right” for those bondholders to get that exemption, but he also thinks pensioners should not be given higher priority than bondholders.

The Treasury Department, at one point, was planning to put pension payments to retired public employees in Puerto Rico ahead of payments to bondholders, according to The New York Times. Labrador said he wants the committee’s bill to include language ensuring that “pensions are not getting any priority over the secure debt.”

“I have spent a lot of time talking to a bit more objective bond companies that don’t have debt in Puerto Rico, and that’s their main concern,” Labrador said, adding that their “main concern” was that when Detroit filed for bankruptcy in 2013, it gave priority to pensions. He added:

House Speaker Paul Ryan, R-Wis., has promised to act on a solution for Puerto Rico and its 3.5 million American citizens, with the hope he would be supported by a majority of Republicans.

Labrador’s endorsement would go a long way to ensuring that, considering his sway in the Freedom Caucus.

The Idaho Republican said he can get there, and that “conservatives can support a bill that gives debt restructuring to Puerto Rico,” but only under certain conditions:

The fight I am having right now with the people who drafted this bill is that they want language to be loose enough that can get votes from the Democrats. Well, guess what, if the language is loose enough, then you are going to be able to get around the language. So what we have to do is be explicit in deciding what this oversight board should be doing and what the parameters are for judging the debt in Puerto Rico. Unless we do that, I think we are doing a disservice to the people in the United States.

A major question is whether the writers of the bill can satisfy enough conservatives without scaring away too many Democrats.

Rep. Jim Jordan, the Freedom Caucus chairman, told reporters today that it shouldn’t matter which party carries the legislation to passage, as long as lawmakers work together to solve a problem.

This story was updated to add the word million in reference to the $422 million debt payment.