GOP Fights Over Whether Puerto Rico Rescue Plan Is a ‘Bailout’ 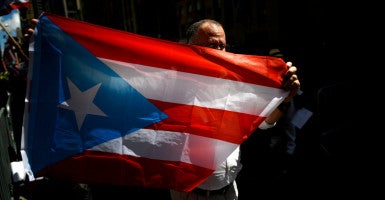 Congress is struggling with how to help Puerto Rico, a U.S. territory that has a $72 billion debt. (Photo: Justin Lane/EPA/Newscom)

The GOP lawmaker charged with devising a plan to rescue Puerto Rico from its debt crisis uses a word dreaded by most Republicans—bailout—only to describe what could happen if Congress doesn’t act now.

“The soonest you solve this problem or get a structure in place to solve the problem, the more you lessen the problem,” said Rep. Rob Bishop, the chairman of the House Natural Resources Committee. “The longer you wait, the worse it becomes. If we do nothing, there will be so much pressure to do a bailout, that it may happen, and not even I can vote for that.”

In an interview with The Daily Signal, Bishop, R-Utah, said the Puerto Rico debt restructuring bill his committee introduced earlier this month—which is currently being revised to satisfy critics from both the left and right—doesn’t qualify as a bailout. The legislation does not provide money for Puerto Rico.

“There is no way you can define it as bailout,” Bishop said. “There is no taxpayer money on the hook, no government money going to Puerto Rico and no direct funds going there. To claim this is a bailout is an effort to scare people. It’s about creating a culture to get Puerto Rico in a position where it can pay its debts.”

But some conservatives are not so sure, and their opposition threatens House Speaker Paul Ryan’s promise to act on a solution for Puerto Rico and its 3.5 million Americans, which he hoped would be supported by a majority of Republicans.

In an interview with The Daily Signal, Rep. John Fleming, R-La., acknowledged that the Natural Resources Committee plan is not a financial bailout, but he argues it functions in a similar way because Congress is “changing the rules” to benefit Puerto Rico.

“I have been around for eight years and these arguments are beginning to feel really familiar to me: that to avoid some ultimate catastrophe that no one foresees, we have to do something and we have to do it fast,” said Fleming, who belongs to the conservative House Freedom Caucus. “It sets a huge precedent that Congress can come in the middle of the game and change the rules. Congress is basically saying, ‘We will do this really nice thing for you if it gets you out of a pinch.’ And that’s an instant bailout right there. Even if we don’t spend a dime of taxpayer money, there are people being bailed out.”

Majority Leader Kevin McCarthy, R-Calif., told reporters Tuesday that “I don’t see how” the House would be able to act in time for Puerto Rico to make a $422 million debt payment due May 1.

Puerto Rico has already missed other bond payments, but this one would be the largest. The island also has a $2 billion payment due July 1 on its general obligation bonds, which are guaranteed by Puerto Rico’s constitution. The House will take a one-week recess next week, further delaying action.

While Bishop downplayed the unresolved “minor” disagreements—between the Obama administration’s Treasury Department (and allied Democrats) and Republicans—some are skeptical that a deal will get done anytime soon.

“I think they will miss their May deadline, and July 1 is no guarantee either,” said Fleming, who is a Natural Resources Committee member, but not a participant in the negotiations. “Within the Freedom Caucus and between other conservatives, there’s a little ambiguity on whether this is the right thing to do. Because this is a pretty deep issue, and it’s complicated, and if you don’t look underneath several layers, you may not understand all that’s in play here.”

Fleming hinted at a frustration Bishop has with dissenters of his committee’s bill. Two weeks ago, after the House’s Easter recess, Bishop had to abruptly cancel a vote on the Puerto Rico bill in the Natural Resources Committee because it was short of votes. Bishop also felt a shortage of lawmakers actually read the legislation and understood what was in it.

“It is fair to say everyone came back from the break not realizing this would be confronting them,” Bishop said. “It was obvious no one took this seriously. Now we just need them to feel comfortable in their hearts, because they know in their mind this is something they need to do. And if they don’t do it by May 1, it’s bad, but it’s not the end of the world. There will be much bigger defaults in the future, and some are still in denial that may actually happen. So it may be good for them to see that yes, there may be a serious default if we do nothing.”

Bishop’s bill would create a seven-member outside fiscal oversight board that would manage a process by which Puerto Rico could restructure its $72 billion debt load. If voluntary talks between debtors and creditors fail, the parties can take the case to bankruptcy court. The bill also includes a stay on creditor lawsuits against Puerto Rico. Rep. Rob Bishop, tasked with leading a plan to help Puerto Rico, calls the island’s debt crisis a “national problem” that “should not be a partisan issue.” (Photo: Bill Clark/CQ Roll Call Photos/Newscom)

Bishop says the process facilitated by his bill is different than Chapter 9 bankruptcy, the type of mechanism that municipalities use, although the bill uses similar language. Under current federal law, Puerto Rico is barred from getting any type of bankruptcy relief.

Rep. Tom McClintock, R-Calif., of the Natural Resources Committee, argues that providing Puerto Rico the opportunity to reduce its debt signals that Congress could give the same authority to struggling states that also owe a lot of money to investors.

“If Congress steps in and essentially destroys the reliability of full faith and credit bonds issued by Puerto Rico, it will have severe repercussions in current bond markets because investors will look at the full faith and credit promised by the 50 states and realize that can be rescinded at any time,” McClintock told The Daily Signal. “Chapter 9, or something like it, would renounce this guarantee, and could cause interest rates paid by states like California and Illinois to rise dramatically.”

Like other attacks against his bill, Bishop denies this one.

“What we are doing will have no impact on state pensions, or on states—nothing period,” Bishop said.

“That’s why a lot of these arguments are mind numbing because they are just inaccurate. I feel like I’m saying the sun is the moon and day is night.”

Bishop is a reluctant leader of Ryan’s mission to help Puerto Rico. As chair of the Natural Resources Committee, he’s more comfortable dealing in federal land ownership issues that concern the constituents in his state. But the Natural Resources Committee governs the U.S. territories, so Bishop is here in the spotlight, trying to find a bipartisan consensus to a complex problem.