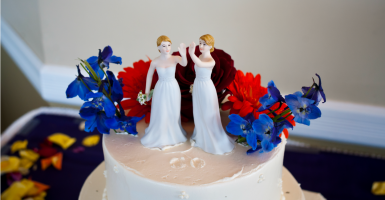 Jack Phillips, a Colorado baker, doesn't want to be forced to make and decorate cakes like this for same-sex marriages. (Photo: Richard B. Levine/Newscom)

The Colorado Supreme Court will not review the case of a Denver-area “cake artist” ordered by the state government to bake and decorate cakes to celebrate same-sex marriages.

Lawyers for Jack Phillips, owner of Masterpiece Cakeshop in Lakewood, Colo., said they are evaluating his legal options.

“We asked the Colorado Supreme Court to take this case to ensure that government understands that its duty is to protect the people’s freedom to follow their beliefs personally and professionally, not force them to violate those beliefs as the price of earning a living,” Jeremy Tedesco, senior counsel for Alliance Defending Freedom, said in a formal statement following the news Monday.

Because of his Christian belief that marriage is between one man and one woman, Phillips in 2012 declined to bake a cake celebrating the same-sex wedding of Charlie Craig and David Mullins.

“There’s just certain events, certain cakes I don’t make,” Phillips told The Daily Signal in an extensive phone interview from his shop last August. “That was one of them.”

After the two men filed a discrimination complaint against Phillips and Masterpiece Cakeshop, the Colorado Civil Rights Commission ruled that the bakery violated the state’s anti-discrimination policy.

In August, the Colorado Court of Appeals ordered that Phillips and his staff must bake cakes for gay marriages. The state Supreme Court on Monday declined to review that order.

“The highest court in Colorado today affirmed that no one should be turned away from a public-facing business because of who they are or who they love,” Ria Tabacco Mar, staff attorney for the American Civil Liberties Union’s LGBT Project, said in a prepared statement. “We all have a right to our personal beliefs, but we do not have a right to impose those beliefs on others and harm them.”

Jack, who has happily served people of all backgrounds for years, simply exercised the long-cherished American freedom to decline to use his artistic talents to promote a message and event with which he disagrees, and that freedom shouldn’t be placed in jeopardy for anyone.

“We are evaluating all legal options to preserve this freedom for Jack,” Tedesco said, referring to Phillips’ First Amendment right to freedom of religion.

>>> 24 Questions for Jack Phillips, the Baker Who Gave Up Wedding Cakes for God

As The Daily Signal previously reported, Phillips has opted not to bake any wedding cakes at all since March 2014.

“This is a matter that affects all Americans, not just people of faith,” Nicolle Martin, another lawyer for Phillips, told the Associated Press.

Phillips also does not bake cakes for bachelor parties, Halloween celebrations, anything dealing with witchcraft and demons, or ideas that violate his Christian beliefs.

“Sometimes it seems like I’ve turned down more cakes in a day than I’ve taken orders for,” Phillips said in a video produced by Alliance Defending Freedom.