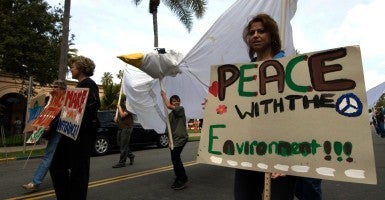 Before you write me off as a fossil fuel industry operative, let me explain this and other unconventional ways Americans are good stewards of the environment.

1) Profit-seeking, entrepreneurial companies. Environmental extremists have worked hard to paint economic enterprise as the greedy enemy of the environment. In reality, they often go hand in hand naturally. For example, Wal-Mart knew it could save millions on transportation costs if its trucks improved gas mileage by just 1 mpg.

Efficiency comes with upfront costs, but it proved to be a good investment for Walmart. Entrepreneurial companies naturally seek to get the biggest bang for the smallest buck, an incentive that leads to conservation of resources, efficiency, and ingenuity that improve the environment.

2) Smartphones and Dishwashers. When was the last time you referenced a paper copy of the yellow pages for a phone number? Some have mused about when the final print will be, considering that references have tumbled over the past decade.

Computers and smartphones have unlocked entire libraries without a single piece of paper being used, not to mention the phone directories as well—no door stopper-of-a-book necessary. Dishwashers tell a similar story.

According to ENERGYSTAR.gov, using a dishwasher saves 230 hours of work a year, consumes half as much energy, and saves almost 5,000 gallons of water compared to washing dishes by hand. Free markets drive efficiency and innovation (though trouble comes when government distorts those opportunities with mandates and subsidies).

3) Fences. Property rights create a powerful incentive for environmental stewardship. For example, the DuBose family in Garland, N.C., are ardent quail hunters who have invested in their property to restore native grassland habitat for the bird in partnership with Orvis and local seed farms.

It aims to become a desirable hunting retreat. And for those like some environmental activists who wish to keep land from any human interaction, owning property also gives them that opportunity. The bottom line is, people are more interested in taking care of something they own than in public property that “someone else” is supposed to care for.

4) Resource “scarcity.” One of the most powerful motivators for technological innovation is scarcity. Copper used to be essential to modern communication lines and fears of shortages led to exploration of both new sources and new solutions. One of those solutions was fiber optic cable. As CEI’s Fred Smith writes, 1,000 tons of copper can be replaced by just 55 pounds of silicon for fiber optic cables that carry over 1,000 times the amount of information as copper cables could.

5) A new coal plant. Americans are accustomed to both clean air and readily available, affordable electricity. But that is not the case all over the world. The people and businesses of energy poor Kosovo currently rely on two old power plants for their electricity, one of which (named Kosovo A) is a Soviet era model that is considered Europe’s dirtiest power plant.

It has exacted a heavy toll on air quality and the health of nearby Kosovars. The proposed solution: a new, modern coal plant to replace Kosovo A, which is being financed in part by American company ContourGlobal. All energy choices have costs and benefits, including those like wind and solar, which are considered “green.” But as technology has advanced, people have engineered ways to make coal power plants more efficient and safe while still providing the affordable, reliable baseload electricity that is so necessary for daily life.

6) Wealth. It’s clear that wealthier nations are greener nations for the simple reason that they can afford to be.

Ultimately, free people and free markets are the engine of superior environmental stewardship. Today should be as much a celebration of that as it is of nature.