The ‘Chilling’ Reason This Doctor Says Georgia Fired Him 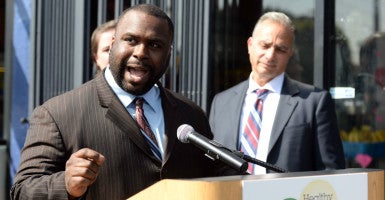 Dr. Eric Walsh's lawsuit against Georgia alleges state officials fired him in May 2014 over his religious convictions. He is pictured here in Pasadena, Calif., in March 2014, when he was that city's public health director. (Photo: Keith Birmingham/Zuma Press/Newscom)

A public health official, who says he was fired by Georgia’s health agency for the content of his sermons, filed a lawsuit today against the state claiming religious discrimination.

Dr. Eric Walsh accepted a position as the Georgia Department of Public Health’s director for the northwest part of the state in May 2014. A week later, state officials requested copies of sermons he had preached as a lay minister for the Seventh Day Adventist Church, according to First Liberty Institute, a legal organization that defends the religious freedom of Americans.

“Dr. Walsh was terminated because of something he said in a sermon,” Jeremy Dys, senior counsel for First Liberty Institute, told The Daily Signal. “No one should be fired for something they say in their sermon.”

First Liberty Institute and the law firm of Parks, Chesin & Walbert filed the lawsuit in the U.S. District Court for the Northern District of Georgia. They sued the Georgia Department of Public Health on behalf of Walsh.

“Bureaucrats cannot deny qualified people of faith government jobs simply because they express their beliefs, especially in a house of worship,” Roger Severino, director of The Heritage Foundation’s DeVos Center for Religion and Civil Society, told The Daily Signal. “If the First Amendment means anything, it’s that government bureaucrats have no business acting as sermon review boards. That would be religious discrimination, pure and simple.”

The lawsuit charges the state with religious discrimination as well as retaliation against Walsh.

“I couldn’t believe they fired me because of things I talked about in my sermons,” Walsh said in a statement released by First Liberty. “It was devastating. I have been unable to get a job in public health since then.”

The Los Angeles Times reported in May 2014 that Georgia health officials retracted a job offer to Walsh, “who had come under fire for controversial remarks he made on homosexuality and evolution.”

“In recorded sermons online, [Walsh] said homosexuality is a sin and evolution is a ‘religion created by Satan,’” The Atlanta Journal-Constitution reported in September 2014 after Walsh filed a complaint with the federal Equal Employment Opportunity Commission in Atlanta.

Government officials terminated Walsh the day after he provided his sermons to the state.

“Public servants shouldn’t lose their jobs because of sermons that they preach off the clock, on their personal time,” Ryan T. Anderson, the William E. Simon senior research fellow at The Heritage Foundation, told The Daily Signal.

Anderson, author of “Truth Overruled: The Future of Marriage and Religious Freedom,” added: “Government employees don’t give up their religious freedom as a condition of their employment.”

In an email to The Daily Signal, Department of Public Health spokesman Nancy Nydam wrote:

“No one should be fired in America simply because they are a person of faith,” he added.

Walsh, a former director of public health in Pasadena, Calif. who has a medical degree and doctorate in public health, was appointed by President Barack Obama to his Presidential Advisory Committee on HIV/AIDS.

“In America, it is against the law to fire an employee for expressing his religious beliefs – especially when that expression takes place in a church setting,” Andrew Coffman, partner in the law firm of Parks, Chesin & Walbert and a volunteer lawyer for First Liberty, said in a statement.

In a redacted email from the State of Georgia, officials discuss how they will review the sermons.

Lee Rudd, director of human resources with Georgia’s Public Health Department, wrote in an email on May 14, 2014:

“OK … I have an assignment for several of us. We have to listen to his sermons on You Tube tonight. If we take a couple of hours each, then we should cover our bases.”

Dys told The Daily Signal that the state of Georgia “spent upwards of 10 hours dividing up sermons and reviewing them on state dollars, on state computers.” He said:

I think when we have a state dividing up sermons like that and nitpicking through line by line what a lay pastor has said in a sermon and then terminating him because of that, I think every American should be chilled to the core at that type of thing.

In a voicemail left for Walsh, the speaker says:

“Dr. Walsh, this is Dr. Patrick O’Neil and Mrs. Kate Phirman, our CFO here at the Department of Public Health in Georgia. Sorry that we have not been able to reach you by phone. We will be sending you a letter, so be on the lookout for that.”

After the message concludes, the caller does not hang up. Two voices can be heard in the voicemail recording, laughing and saying: “There’s no warm way to say it” and “You’re out.”