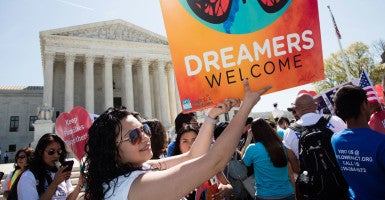 One of the most fundamental challenges facing the United States today is the deep and growing distrust between the American people and their political system in Washington, D.C. And the inconvenient truth—rarely acknowledged by Washington elites—is that the American people’s distrust of their public institutions is totally justified.

Most moms and dads in America still teach their children to follow the rules even when they’re inconvenient, to respect the authority of the law, and to work hard to earn their success. But when they look to their nation’s capital, they see a very different ethos—one that rewards politicians and bureaucrats who rewrite the rules whenever they please, flout the law with impunity, and rig public policy in their favor.

Yesterday the Supreme Court heard oral arguments in United States v. Texas, which challenges one of the most egregious examples of Washington’s corrupted culture: President Obama’s amnesty program, the Deferred Action for Parents of Americans and Lawful Permanent Records (DAPA).

For more than six decades, Congress has exercised its power over immigration by establishing a comprehensive scheme of rules and regulations governing admission to the country and the circumstances under which foreign nationals may be eligible for work authorization or government benefits.

President Obama does not like the current immigration code and, to be honest, I have problems with it as well. But neither of us is allowed to change the law on our own, a fact President Obama used to respect.

With respect to the notion that I can just suspend deportations through executive order, that’s just not the case. . . . There are enough laws on the books by Congress that are very clear in terms of how we have to enforce our immigration system that for me to simply through executive order ignore those congressional mandates would not conform with my appropriate role as president.

But just a few years later, President Obama did exactly what he had previously said was strictly prohibited by the Constitution. With the adoption of DAPA, he unilaterally suspended federal immigration law for more than 4 million aliens living in the United States illegally, granting them “lawful presence,” work authorization, and access to a host of government benefits.

President Obama claims DAPA is just a routine exercise of the chief executive’s inherent power of “prosecutorial discretion,” which gives executive-branch agencies some degree of leeway when enforcing the law. But that power has limits, and it’s clear that DAPA goes beyond them.

For instance, it is a legitimate use of prosecutorial discretion for a prosecutor to decide not to prosecute someone who got a ticket for driving 75 miles per hour in a 65-mile-per-hour zone.

But that same prosecutor could not announce that, as a matter of policy, all motorists are permitted to travel at 75 miles per hour and then create a special lane for them to do so. This would be an obvious abuse of prosecutorial discretion, as it would effectively create a new law.

That is exactly what President Obama did when he created DAPA.

DAPA is not a minor adjustment of immigration-enforcement policy; it is a wholesale rewriting of the Immigration and Nationality Act. Nor is DAPA even remotely comparable to past deferred-action programs implemented by former presidents. Historically, deferred action has been reserved to provide temporary relief to narrowly tailored groups, but President Obama has used it to circumvent the legislative process and unilaterally grant amnesty to millions of foreign nationals living in the United States illegally.

The facts of the case are clear: By adopting the DAPA program, President Obama broke the law, usurped Congress’s authority to regulate immigration, and violated his constitutional duty to “take Care that the Laws be faithfully executed.”

You don’t have to oppose the policy outcome contemplated by DAPA to see the danger of allowing the president to singlehandedly rewrite the law.

In a republic such as ours, the stability and legitimacy of government rests, above all, on a moral foundation of public trust. Citizens must have confidence that the representatives they elect to write and enforce the nation’s laws will do so honestly, if not honorably. But today, that confidence has withered and weakened.

Fortunately, United States v. Texas gives the Supreme Court an opportunity to strengthen the public’s trust in our political system by affirming that in America no one, not even the president, is above the law.