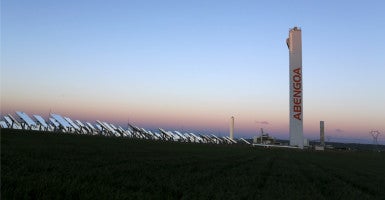 A Spanish solar energy company benefiting from $191 million in financing from the Export-Import Bank declared bankruptcy last month, calling into question whether the embattled agency will see repayment of the tens of millions of dollars in taxpayer-backed loans on its balance sheets.

Abengoa, which operates worldwide, filed for Chapter 15 bankruptcy in U.S. Bankruptcy Court in Wilmington, Del., and has until the end of October to restructure its $16.4 billion of debt.

According to Ex-Im’s records, the bank authorized more than $300 million in loans and loan guarantees to Abengoa and its subsidiaries, with more than a dozen transactions approved from 2007 to 2015.

Of the $316 million in financing Ex-Im authorized, the bank disbursed $191 million to Abengoa and its subsidiaries, its records show. The bank cancelled the remaining $125 million of outstanding credit, an Ex-Im spokesman told The Daily Signal.

Ex-Im’s board of directors approved financing for four loan guarantees—totaling $112.8 million—to an Abengoa subsidiary on June 29. The bank’s charter expired the next day, on June 30, marking the first time Ex-Im has experienced a lapse in its authority in its 81-year history.

According to the bank’s spokesperson, Ex-Im’s exposure to the solar company totals $66.2 million.

With Abengoa’s questionable financial future, some question whether the green energy company will be able to repay the taxpayer-backed financing it received from Ex-Im.

A spokesman for Ex-Im told The Daily Signal the bank is continuing to work with the company to ensure its outstanding debt is repaid.

“Ex-Im Bank has and will continue to closely monitor this situation, and continues to work with all parties and creditors to recoup the outstanding debt,” the spokesperson said in an email. “As with all transactions of this nature, the bank’s exposure is covered by reserves, which are funded by fees assessed on borrowers, not the taxpayers.”

Before Abengoa’s financial woes were made public, the company was scrutinized in media reports for violating U.S. immigration law, workplace safety codes, and environmental regulations, according to the Washington Free Beacon.

In September 2013, the bank approved two loans totaling $33.6 million to Abengoa for solar projects in Spain and South Africa. When the bank authorized the loans, former New Mexico Gov. Bill Richardson, a Democrat, was one of 17 members serving on Ex-Im’s advisory board.

Richardson, who also served as secretary of the Department of Energy under President Bill Clinton, was also a member of Abengoa’s international advisory board at the same time.

Such ties between government agencies and private companies benefiting from taxpayer-backed financing are not uncommon, de Rugy said, and often times firms like Abengoa will “double dip” into several government programs.

“I think what we see with Abengoa, it’s a perfect example of decisions and due diligence that is not driven by how sound a project is, but that is driven by politics,” de Rugy said.

From 2007 to 2014, for example, Abengoa received $3 billion in financial assistance from both Ex-Im and the Department of Energy.

Through its 1705 loan program, the Department of Energy awarded the solar company more than $2 billion in loan guarantees for the construction of two solar plants in the U.S.: one in Phoenix, Ariz., and a second in California’s Mojave Desert.

It was through the Department of Energy’s 1705 loan guarantee program that the now-defunct Solyndra also received financing.

“It just tells you everything that’s wrong with these programs,” de Rugy said. “The decisions are made based on politics and who you know. The more your know, the more double dipping you’re able to do.”

According to the New York Times, Abengoa said $1 billion of the loans and loan guarantees it has received from the federal government have been repaid. The company did not return The Daily Signal’s request for comment.

Bank officials often boast of Ex-Im’s 0.235 percent default rate and say it returns money to the Treasury each year.

But over the last year, Abengoa isn’t the only company to receive taxpayer-backed financing from Ex-Im and face financial woes.

NewSat, an Australian satellite company, benefited from $100 million in Ex-Im loans from 2012 to 2014. The company filed for Chapter 15 bankruptcy in the United States last year.

The company’s bankruptcy—and the decision-making that led to it receiving Ex-Im financing—was scrutinized by Republicans during a June Financial Services Committee hearing, who said the deal was evidence that the bank is “beyond broken.”

Lawmakers said NewSat handed Ex-Im a “$100-million loss” at the “expense of the taxpayers.”