Obama Administration Admits It Could Have Respected Nuns’ Rights After All 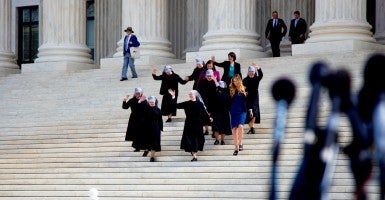 Federal law is clear. If the government can further its goals through a regulation that substantially burdens religious exercise or through one that doesn’t, it must choose the latter. (Photo: Jeff Malet Photography/Newscom)

It may have taken five years, numerous regulatory updates, hundreds of legal battles, and two trips to the Supreme Court, but the government has finally admitted that, well, maybe it was wrong about the Health and Human Services mandate. In a brief filed at the Supreme Court this week in the Little Sisters case, the Obama administration told the justices that it could have mandated insurers issue separate contraceptive and abortion-inducing drug coverage to those who want it without hijacking the health plans of religious employers. This could spell big trouble for the government’s defense of the mandate.

A little background: Under the mandate, the government is threating the Little Sisters and others with heavy fines, if they do not take actions to trigger the inclusion of abortion-inducing drugs and devices, contraception, and sterilization in their health plans.

What the government calls an “accommodation” the Little Sisters call forced collaboration that violates their faith and violates the federal Religious Freedom Restoration Act (RFRA).

Shortly after oral arguments, the Supreme Court asked both the Little Sisters and the Obama administration whether there were any possible alternatives to the current mandate that would provide coverage of contraception to employees but “in a way that does not require any involvement” by religious organizations.

This was a tough set up for the government. As Stanford University law professor Michael McConnell explains in his detailed analysis of the government’s brief:

The question put the government in a bind. If it answered “yes,” it would effectively be admitting to a RFRA violation. But if the government said “no,” it would be appearing unwilling to work with the court on a solution that will satisfy both sides.

After tying itself in some impressive rhetorical knots, that’s exactly what the government admits: that Health and Human Services could’ve enforced this mandate in some other way besides it’s current scheme to commandeer nuns’ health plan. McConnell continues:

Aware that its reasons for saying ‘no’ are weak, the government then admits—on page 14!—that the real answer is ‘yes’—the accommodation ‘could be modified to operate in the manner posited in the Court’s order.’

That admission is a serious blow to the government’s case because it undermines the notion that requiring the collaboration of religious organizations is absolutely essential to providing cost-free contraceptive coverage to employees. Under the Religious Freedom Restoration Act, if there’s a less restrictive way for the government to achieve its interests that’s the method the government has to use by law.

Tellingly, the government then spends the last section of its brief doing damage control by suggesting ways the court can be lenient if it rules for the Little Sisters and orders the Obama administration back to the regulatory drawing board.

The Little Sisters Agree: The Government Doesn’t Need Us

For their part, the Little Sisters of the Poor answer the Court’s question unequivocally in their supplemental brief:

Yes. There are many ways in which the employees of a petitioner with an insured plan could receive cost-free contraceptive coverage through the same insurance company that would not require further involvement by the petitioner.

For instance, the Little Sisters’ brief points to a number of states that allow insurance companies to offer truly separate coverage for either contraceptives or abortion to those who want it.

Religious liberty in America provides every person the freedom to live according to his or her conscience—whether at home, in worship, at work, or in service to others. Even though it’s wrapped in arcane details about insurance, the heart of this case is about the nature of religious freedom and who gets to determine how faith is lived out.

The administration acknowledges it could have mandated contraceptive coverage for employees of religious nonprofits while at the same time leaving the nonprofits themselves entirely out of it. But instead, it threatened religious charities with crippling fines, hounded them all the way to Supreme Court, and still refuses to budge.

Federal law is clear. If the government can further its goals through a regulation that substantially burdens religious exercise or through one that doesn’t, it must choose the latter. That’s how the protection of religious freedom is supposed to work in America and that’s how the Supreme Court should rule in this case.