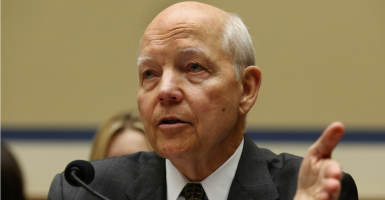 In time for tax season, members of the Freedom Caucus are calling on House Speaker Paul Ryan, R-Wis., and Judiciary Committee Chairman Bob Goodlatte, R-Va., to deliver the head of IRS Commissioner John Koskinen on a political platter.

As most of Congress heads out of town for the weekend, a handful of members filed onto the House floor Thursday evening and renewed an effort to impeach the nation’s top taxman.

They argued that the IRS infringed on free speech when they unfairly targeted conservative groups and they blamed Koskinen for obstructing a congressional investigation into the agency’s conduct.

“When you’re talking about a right that’s so fundamental to Americans, our First Amendment liberties, and it’s infringed upon in this way … we think it warrants something of this magnitude, which is impeaching the commissioner,” Rep. Jim Jordan, R-Ohio, told The Daily Signal.

The move comes just four days before the April 18 deadline to file individual tax returns. That timing was intentional, Jordan said. His group designed the move to spotlight issue during a week when “American are dealing with the IRS in an up close and personal way.”

Already written up, the impeachment articles remain mired in committee. And while conservatives can exert political pressure by rallying public opinion, they can’t technically advance the process.

Only Goodlatte can do that.

Last October, House Oversight and Government Reform Chairman Jason Chaffetz, R-Utah, delivered impeachment articles to the Judiciary Committee for consideration. Since then, Goodlatte hasn’t brought it up for a vote.

That delay has sparked considerable frustration among conservatives, said Rep. Ron DeSantis, R-Fla., one of the architects of the Freedom Caucus push.

“Obviously we haven’t had the success that we hoped for getting leadership to move forward with this,” DeSantis told The Daily Signal. “Anytime we flex our muscle, I think that they feel we’ll get criticized by the press and it’ll backfire on us somehow and they’re very hesitant to make any waves.”

If impeached by the House, Koskinen would face a trial in the Senate. He would become just the 20th federal official to be put on congressional trial in American history.

DeSantis and Jordan stressed that the case against the tax collector is meant as a political check against the IRS and not a criminal prosecution. The two point to Supreme Court Justice Joseph Story, who wrote that impeachment was warranted for dereliction of duty in 1883.

DeSantis, a former federal prosecutor, argues that Koskinen flouted congressional authority when he didn’t comply with a congressional investigation, allowed subpoenaed emails to be destroyed, and misled the public during his testimony.

“This has been a total obstruction of justice. And the question is, will Congress do anything when an agency like that walks all over us? Or are we just going to let it happen?” DeSantis asked.

Last July, when there were calls for Koskinen to be removed, White House deputy press secretary Eric Schultz called him “a man of the highest integrity,” according to the Washington Times, and the Treasury Department similarly defended him, saying in a statement that “Commissioner Koskinen is a man of the highest integrity with a steadfast commitment to public service during difficult times,” according to the Associated Press.

But GOP leadership isn’t likely to provide an answer to DeSantis’ question until after the November election.

At a Thursday press conference, Ryan said that the IRS “needs to be cleaned up,” but stopped short of calling for Koskinen’s impeachment. “What I think we need to do is win an election, get better people in these agencies, and reform the tax code,” Ryan said.

When the scandal came to light, Lois Lerner, director of the IRS Exempt Organization Unit, stepped down from her position in Sept. 2013. And in May of 2014, the House voted to hold her in contempt of congress for refusing to testify.

Conservatives want to tap into taxpayer frustration to make their argument that Koskinen must go.

“At tax time, people are going to say, ‘gee, if the IRS asks for document from me and I destroy them, I wouldn’t get away with that,’” DeSantis said. “But that’s effectively what Commissioner Koskinen has been able to get away with.”

Goodlatte’s office did not respond to a request for comment.