Breaking: Freedom Caucus to Call for Impeachment of IRS Commissioner From House Floor 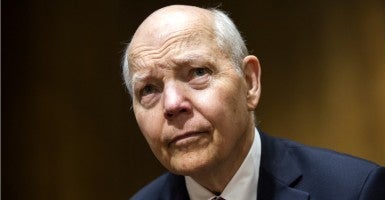 From the floor of the House of Representatives, members of the Freedom Caucus will renew today the push to impeach IRS Commissioner John Koskinen, The Daily Signal has learned.

Lawmakers plan to argue around 5 p.m. EST, according to a member of Congress.

Last year, House Freedom Caucus chairman Jim Jordan and Rep. Ron DeSantis wrote in a Wall Street Journal op-ed that Koskinen is unfit to serve as the nation’s top tax officer because of his continued obstruction of a congressional investigation into the agency’s treatment of conservative groups.

Largely symbolic, the impeachment call comes in the midst of tax season as many Americans scramble to complete their tax returns by the April 18 deadline. By calling for Koskinen’s impeachment directly from the floor, conservatives hope to push-start a process that has stalled in committee so far.

But since then, House Judiciary Committee Chairman Bob Goodlatte, R-Va., has not moved forward with the proceedings.

After a congressional investigation Lois Lerner, the director of the IRS Exempt Organization Unit, stepped down from her post in Sept. 2013. For failing to turn over subpoenaed documents and refusing to testify, the House voted to hold Lerner in contempt of Congress in May 2014.

The Constitution invests impeachment power in congress but the authority has been deployed sparingly. Congress has only impeached 19 federal officials since the nation’s founding.