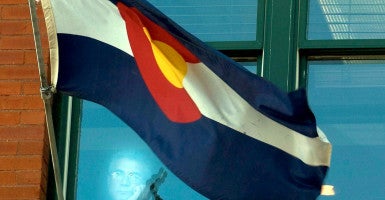 In November, Colorado voters will vote on a ballot measure that, if passed, would replace Obamacare with ColoradoCare, a single-payer model of health care. (Photo: CJ Gunther/EPA/Newscom)

As Republican policymakers nationwide continue debating ways to replace Obamacare with patient-centered solutions, a Colorado group has landed a plan implementing a single-payer model of health care on November’s ballot. Coloradans are already bracing for its impact.

In the general election, Colorado residents will not only head to the polls to cast their votes for president, but they’ll also weigh in on a controversial ballot measure: Amendment 69, which would create a government-run health care plan in the Centennial State.

The plan, formally known as ColoradoCare, is the first in the country that would replace Obamacare, action made possible by Section 1332 of the Affordable Care Act, which allows states to receive a waiver from the health care law if their own plan provides residents with “access to high quality, affordable health insurance while retaining the basic protections of” the health care law.

Under the initiative, funded largely by a 10-percent tax on payroll, Colorado residents would qualify for “comprehensive” health insurance coverage. According to a study from the Colorado Health Institute, ColoradoCare would cover nearly 83 percent of the state’s residents, including those currently enrolled in Medicaid. The rest of the state’s population would receive coverage through Medicare or the Department of Veterans Affairs.

In the Centennial State, supporters of the plan are hoping that ColoradoCare will expand access to coverage for its residents. Opponents, meanwhile, are warning that government-run insurance will cause residents and health care providers to flee the state in search of more options and better quality care.

“ColoradoCare is a higher dosage of the same failed prescription of Obamacare,” Jonathan Lockwood, executive director of Advancing Colorado, told The Daily Signal. “It’s Obamacare that has made ColoradoCare possible.”

Advancing Colorado launched in 2014 as a nonprofit free market advocacy group focused on fighting growing government intervention. The group, thus far, has emerged as one of the few actively fighting ColoradoCare.

With seven months to go before Colorado voters hit the polls, residents of the state who spoke to The Daily Signal said talk of the proposal is slowly starting to bubble up.

However, a bipartisan campaign called Coloradans for Coloradans and led by state Treasurer Walker Stapleton, a Republican, and former Gov. Bill Ritter, a Democrat, launched in January with the goal of defeating Amendment 69.

In a press release, the campaign focused on ColoradoCare’s high cost and called it a “risky and untested state-run health insurance system.”

Colorado residents are shying away from speculating about whether Amendment 69 will pass, but some Coloradans are already warning that they may be forced to leave the state in anticipation of what a single-payer model will bring.

“If we were to heed this all, I would probably have to move,” Marjorie Haun, a resident of Colorado’s Western Slope and activist with Heritage Action for America who has also written for The Daily Signal previously, told The Daily Signal. “The thought of not having any choice at all, the thought of the unknowns, as you get older, you start looking at potential health problems. It’s pretty frightening.” Getting on the Ballot

If Amendment 69 wins support from voters in November, Colorado would become the first state in the country to implement universal health care.

Such a model was first attempted in Vermont back in 2014. However, Democratic Gov. Peter Shumlin eventually ended his “Medicare for all” approach to health care after admitting it would be too costly for the state and “might hurt our economy.”

Efforts to get ColoradoCare on November’s ballot were spearheaded by ColoradoCare Yes, and the campaign needed 98,492 signatures for the proposal to land before voters.

More than 500 volunteers collected a total of 158,831 signatures. In October, ColoradoCare Yes delivered petitions to the Colorado secretary of state’s office on a gurney in a rented ambulance, where they were rolled into the Denver office for validation.

More than 109,000 were approved, according to ColoradoCare Yes.

ColoradoCare Yes did not respond to interview requests.

Opponents of Amendment 69 liken the drive to qualify ColoradoCare for November’s ballot to last year’s initiative legalizing marijuana in the state, though they expect the impact to be worse.

“I just think legalizing pot was pretty crazy,” Haun said. “This is that times 10. This would really devastate the state. Anything could happen in Colorado.”

‘We Can Do Better’

The state estimates that ColoradoCare will cost $25 billion, paid for by a 10-percent payroll tax increase divided between employers, who pay 6.67 percent, and employees, who pay 3.33 percent. ColoradoCare’s supporters praise the plan for ultimately lessening the amount of money Coloradans have to pay for health care, since residents won’t have to pay co-pays or worry about deductibles.

However, Linda Gorman, director of the Health Care Policy Center at the Denver-based Independence Institute, warned that ColoradoCare would ultimately end up costing the state.

“It’s a really bad idea, and we can do better,” Gorman told The Daily Signal. “Not only are you covering yourself with this expensive health care system, but you’re reducing the economic prospect of the state as a whole.”

The new proposal would also receive $11.6 billion in federal funding that currently flows to the state through Medicaid and its Obamacare exchange. To receive the federal dollars allocated through its state-run exchange, ColoradoCare would need to qualify for a waiver from the Affordable Care Act.

“They’re getting a share of tax money forever, which is bad government,” Gorman said.

Colorado residents all qualify for ColoradoCare, but supporters of the measure say that it’s not truly single-payer, since private health insurance companies can still sell competing coverage in the state.

Though insurance companies can continue to sell coverage in the state, Democratic Gov. John Hickenlooper warned in January that ColoradoCare’s implementation would likely deter those companies from moving into the state.

“I can’t imagine there’s any chance that [ColoradoCare] will pass,” he said during a Jan. 6 meeting. “But I can tell you there are a couple [of] large health care related companies that are looking at moving their headquarters here, and they saw that, that that’s going to be on the ballot, and they paused.”

Though much of ColoradoCare will be funded through a tax increase and supplemented with federal dollars, Coloradans are worried about the impact a 14.63 percent income tax would have on their own budgets.

ColoradoCare’s structure is similar to that of a cooperative, in that residents—which opponents of the plan say hasn’t been defined—elect a 21-member board of trustees. The board is tasked with setting reimbursement rates for providers and governing ColoradoCare’s financing.

It’s the board of trustees’ ability to control medical prices for health care providers that has Gorman warning of the consequences this will have on residents’ access to and quality of care.

“The control mechanism in all of this is you’re voting on an initiative that says no health care provider licensed by the state of Colorado, which covers hospitals, pharmacies, nurses, doctors, massage therapists, everybody, can charge a co-pay or deductible that isn’t allowed by ColoradoCare,” Gorman said. “So basically what it is is it’s a giant price-fixing mechanism. Under threat of losing your license, you’ve got to charge the price that they set.”

Gorman said she expects to see physicians leaving the state for other places where they can charge more for their services and shortages in the services available to Colorado residents, particularly among the most vulnerable populations.

In addition to worries about the board of trustees’ ability to set prices, ColoradoCare’s structure as a cooperative has provided additional fodder for those against the proposal. Many point to the failed consumer operated and oriented plan, or co-op, created in Colorado under Obamacare as a case study for why government intervention in the health insurance market doesn’t work.

Colorado HealthOp launched with $72.3 million in loans from the federal government but closed its doors in October after receiving less money than it anticipated from Obamacare’s risk corridor program.

“We’ve had Colorado’s cooperative on the state exchange fail. Young people who were enthusiastic about Obamacare have lost their coverage, and a lot of them are facing the tax penalties this year for the first time because the timing was wrong with obtaining health care, or they just forgot,” Haun said. “Those lessons you would think are something that alert people to government controlling the health care system.” Though campaigns surrounding ColoradoCare and the ballot initiative have yet to ramp up, Mary Clark, an activist with Heritage Action for America, said she is already bracing for the impact the law—”Obamacare on steroids”—will have on providers and consumers.

“It will have massive impact,” Clark told The Daily Signal. “People will leave. Doctors will leave. I don’t know a state in the union [that] has this. I cannot imagine what this would do. It’s just horrific.”

Instead, she, along with other Republican activists, said that the state needs more “free-market” solutions that move further away from both the changes Obamacare made to the insurance market and what ColoradoCare will impose on the state.

“Single payer is the exact opposite way that we need to go,” Tina Bogani, another activist who works with Heritage Action, told The Daily Signal. “We need a system that has as much competition as possible. It reduces costs, it serves everyone and people can choose the doctor they want. That competition creates the innovation we’re looking for in terms of better technologies and options for people.”

Advancing Colorado’s Lockwood, meanwhile, said he would prefer a system of health care that gives consumers as many options as they have in choosing phone plans.

“We have the right to health care freedom, and this just takes it away,” he said. “More people should be involved in the health care decision-making than less. We should be putting power in consumers’ hands. This whole thing is a major scam.”