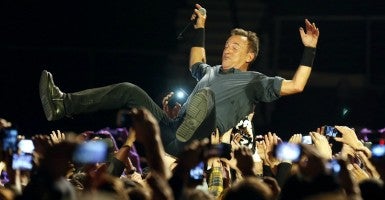 GREENSBORO—A bathroom bill, a rock star, and competing claims of privacy have catapulted North Carolina into the center of a national debate over transgender rights. And Rep. Mark Walker, R-N.C., says he knows why.

The freshman legislator argues that Democrats are manufacturing outrage over the law for political gain in the Tar Heel state.

“Why is North Carolina in the crosshairs?” Walker asked more than 60 local pastors gathered in a church gymnasium for a prayer breakfast Monday. “The reason why is that North Carolina is supposed to be a purple state.”

Walker interprets the Democrat outrage over the issue as part of a calculated strategy to retake control of the Senate, turn the state blue, and establish a base of support for the presidential election. “North Carolina is the battleground state in the South,” he said.

Currently, the battle is raging over a state law commonly referred to as H.B. 2, or the bathroom bill.

Republican Gov. Pat McCrory called the General Assembly into a special one-day session on March 23 to pass H.B. 2 into law. That legislation overruled a local Charlotte ordinance that allowed individuals to choose public bathrooms corresponding with their gender identity, not their biological sex.

Supporters argue that the bill is necessary to preserve privacy and safety rights of women.

“The question I’ve asked several times, that can’t be answered, is, what if you have a sexual predator posing as transgender who wants to use the girls’ restroom?” Walker asked Monday. “How do you resolve that in the girls’ showers and locker rooms? I don’t know if that question can be answered.”

Opponents have quickly condemned the law as bigoted and charge that it places LGBT individuals in danger. In a national letter coordinated by the Human Right Campaign, more than 100 companies registered already their disapproval of the “anti-LGBT law.”

The protest came to a head last Friday, when Bruce Springsteen nixed an upcoming concert in North Carolina just two days before the show. Afterward, Walker gained national attention after an interview with The Hollywood Reporter, where he accused The Boss of being “a bully.”

Walker told The Daily Signal that Springsteen “has every right to do that, but there’s a hypocrisy here.”

The Baptist minister turned lawmaker criticized Springsteen for canceling on short notice, doing harm to the local economy, and then continuing his tour in other states that “have no more stringent anti-discriminatory laws than we do.”

And Walker believes that Democrats have “intentionally” ginned up opposition for a calculated and political end. “I think that’s ultimately some of the reasoning behind it.”

It’s not historically unusual for the Tar Heel State to waver between red and blue during both Senate and presidential races. In the 2008 general election, Democrats carried that state four years before Republicans did in 2012.

Another Republican member of the North Carolina congressional delegation, Rep. Mark Meadows, agrees that the issue has been blown out of proportion. He said it doesn’t deserve national headlines and shouldn’t be trending on social media.