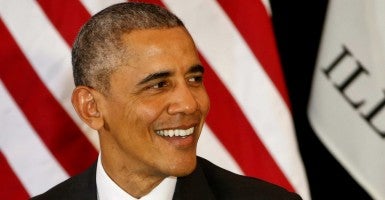 Bureaucrats at the Department of Labor have published 1,000 pages of new regulations. (Photo: Kamil Krzaczynski)

If you want to understand the corruption, deceit, and might-makes-right culture at the core of the federal government’s dysfunction and disgrace today, look no farther than the two big stories out of Washington last week.

On Monday, President Barack Obama’s Treasury Department released sweeping new regulations effectively rewriting the tax code to make it even more difficult for U.S. companies to escape the double taxation on overseas earnings currently extracted by the IRS. Rather than trying to lower the U.S. corporate income tax rate—which is the highest in the industrialized world—the Obama administration wants to make it even more costly to do business in America.

The Obama administration wants to make it even more costly to do business in America.

Not to be outdone by the economic folly of their colleagues at the Treasury Department, bureaucrats at the Department of Labor have published 1,000 pages of new regulations—collectively called “the fiduciary rule”—targeting the investment industry that will make it more expensive and less likely for low and middle-income Americans to save for their future. Working Americans already face a host of obstacles that prevent them from saving for retirement or unexpected financial hardships, and observers from across the political spectrum agree that these new regulations will only further discourage private savings.

But as harmful as these policies will be for American families and businesses trying to get ahead in a still stagnant economy, the real scandal of these new sets of rules are the flagrant abuses of power that created them.

In 2014, Treasury Secretary Jack Lew said, “We do not believe we have the authority to address this inversion question through administrative action. […] That’s why legislation is needed.” This was not a groundbreaking statement: Everyone in Washington knows that the Secretary of the Treasury does not have the power to unilaterally change the tax laws just because he doesn’t like them. And yet that’s exactly what he did this week, with the blessing of Obama—abandoning his constitutional scruples and betraying his respect for Congress’ rightful role in writing tax policy in order to score cheap political points.

Likewise, the secretary of labor has no legitimate authority to regulate the transactions between brokers and their retail clients as it does in its new fiduciary rule. The Dodd-Frank so-called financial reform law of 2010 explicitly authorized the Securities and Exchange Commission to perform this function. And yet, because the SEC had not yet fulfilled this mandate under Dodd-Frank, the Department of Labor stepped in to fill the regulatory void.

This is not how the American people expect their government to work, because it’s not how the federal government is supposed to work. The rules and regulations governing American society—especially those that have a major impact on our economy—must be debated and passed by elected members of Congress, not negotiated by industry insiders and unelected regulators behind closed doors in the shadowy federal bureaucracy.

That’s why I recently joined nine colleagues from the House and Senate to launch the Article I Project, a network of conservative policymakers working together on a new agenda of government reform and congressional re-empowerment.

The Article I Project recognizes that the problem of executive-branch overreach is often the result of perpetual, intentional congressional under-reach, and it proposes that a reclamation of those Article I powers by the House and Senate can lead not only to a more responsible, trustworthy government, but to a healthier and happier republic.