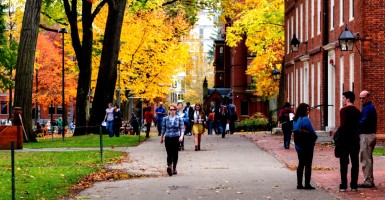 Harvard University campus. If students really wanted to challenge authority, one would think a good place to start would be by challenging the left-wing ideas that those in authority teach. (Photo: istockphoto)

Where direct regulation does not change hearts and minds, America’s universities have long used indoctrination. At Harvard’s Kennedy School of Government, for example, student orientation now includes instruction in “privilege.” If you aren’t already aware, “privilege” is a term employed in conversation as a way to encourage the listener to recognize that his or her upbringing might be clouding dialogue. In practice, the term is generally used to shame and intimidate people the person employing the term doesn’t like—usually ordinary Americans.

But this kind of shaming is not enough, apparently. For months now, students and faculty at Harvard Law School have banded together to create what they have labeled the “Reclaim Harvard Law Movement.” While not really a movement, these privileged students are making increasingly silly demands.

They argue that “the law school [Harvard] refuses to provide adequate institutional support for an office of diversity and inclusion, hire critical race theorists, promote staff of color in the workplace to management positions in their due course, provide adequate contextualization in curricula, educate its professors, its staff, and its students around cultural competency, take the steps that are necessary to accord adequate and equal dignity to marginalized students.” On top of this, they claim that the law school promotes and sustains systems of systemic racism and exclusion of marginalized groups.

That’s a lot of finger-pointing to do for a law school that openly states that its population comprises 44 percent students of color. (On the other hand, Harvard University itself is being sued for alleged racially discriminatory “affirmative action” programs, so perhaps they do have some atoning in store.)

Not satisfied or mollified by such facts, some students have decided to physically colonize a building for their own use. According to their webpage, the students behind Reclaim Harvard Law claim the right to occupy the Caspersen Center student lounge, which they have taken it upon themselves to rename Belinda Hall. Who is Belinda? Apparently, she was a former slave who demanded reparations, thereby implying that Harvard Law students and some of the workers they purport to be advocating on behalf of are in a similar situation to slaves.

This situation is not unique. Indeed, the Reclaim Harvard Law Movement follows the typical pattern of privileged left-wing student protests. They call themselves a “movement” and cause physical disruptions on campus. They compare themselves to various civil rights movements and issue a long list of absurd demands. While they think of themselves as challenging the system, it is almost as if their protests have become a routine part of that system.

Harvard Law School is one of the most respected legal institutions in the world and prides itself on training future lawyers and America’s future leaders. It is, indeed, a bastion of privilege—deserved privilege in most cases. However, it has also been the origin of much left-wing thought, including “Critical Race Studies,” a legal theory with its roots in Marxism. If students really wanted to challenge authority, one would think a good place to start would be by challenging the left-wing ideas that those in authority teach.

Mind you, these student protesters are not taking the most radical step, which would be to quit Harvard Law School because of the pervasive inequities that they claim exist. Rather, they seek to benefit from the “privilege” that association with Harvard Law School provides while at the same time employing the language and tactics that cultural elites on the left have given them to engage in behavior that, perhaps, assuages their guilt for taking advantage of the many privileges that their association with the school will provide.

Things have gotten so heated at Harvard Law that the school has begun to…monitor the situation closely. According to sources, “[t]he school filmed activities in the room Friday to ensure that students were complying with the policy outlined in their emails. Activists said they identified several undercover Harvard University Police Officers masquerading as admissions officers stationed in the hall watching Friday’s dispute play out.” In other words, instead of directly addressing the severity of the movement, Harvard Law has merely conducted surveillance while the insanity continues.

Reclaim Harvard Law has taken campus activism to such extreme lengths that even former supporters are concerned. A recent article published in The Harvard Law Record calls for the movement to “stop destroying itself.” A former supporter claims that the movement has “taken over Belinda Hall not just physically, but mentally. Everyone who dares to disagree with you is labeled a racist or an extremist.”

This type of activism does not promote respectful dialogue and healthy change on campuses. Rather, it is just another example of privileged silliness.