Why More States Are Requiring Work Requirements for Food Stamps 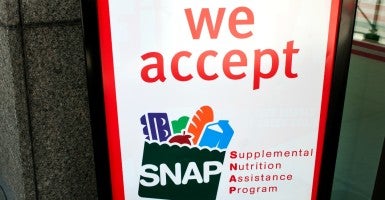 Welfare assistance should be available to those in need. (Photo: Richard B. Levine/Newscom)

Newspaper headlines have been bemoaning that more states will now have to require adults on food stamps—who are able-bodied and without dependents—to work.

Part of the reason for the increase was that Obama’s stimulus package waived food stamps’ work requirement. This required those who are adults and able to work and who don’t have children to work part-time (or do some type of work activity) in order to get food stamps. If not, their benefits would be limited to three months.

After 2009, most states continued to receive waivers until this year. Even now, however, the majority of states still receive a partial waiver, meaning that parts of states are exempt from the work requirement.

Some states decided to end their waivers early, and evidence shows that the work requirement in these states has been beneficial.

After Kansas ended its work requirement waiver in 2013, it saw a 75-percent decline in its caseload of able-bodied adults with dependents. For those who left the program, average income increased within a year, from $2,453 annually to $5,562 annually: an amount greater than their previous income and food stamp benefits combined. For those still on food stamps, the work requirement led to more employment and higher incomes.

Maine is another example. The state reinstated work requirements in December 2014, and within three months, its caseload of adults without dependents dropped by 80 percent, from 13,332 to 2,678. Nine months later, it had dropped to 1,886. Most chose to forgo benefits rather than meet the work requirements.

A common concern is that those people choosing not to fulfill the work requirement lack adequate assistance to meet the requirements, but the numerous options for work, training, and community service provided by the state of Maine were met with very little response.

As reported in a previous Heritage Foundation article, “when the Maine Department of Health and Human Services conducted outreach to about 700 able bodied adults without dependents in Portland to inform them about a volunteer program that could fulfill the community service work requirement, only about 15 of the 700 contacted responded.”

Welfare assistance should be available to those in need, but policy should encourage self-sufficiency for able-bodied adults rather than simply provide a one-way government handout. The examples of Kansas and Maine show that work requirements accomplished what they are intended to do: Encourage self-sufficiency. Work requirements promote greater self-reliance and establish reciprocal obligation between the beneficiary and the taxpayers who provide the benefits.

However, the vast majority of the federal government’s 80 means-tested welfare programs do not include a work requirement. Good welfare policy should promote productive participation in society through work to improve the well-being of recipients.