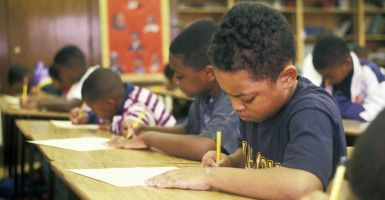 Officials are calling for education reform after bribery indictments against Detroit public school officials and a supplier alleged $2.7 million in fraudulent spending, even as Michigan’s governor signed off on nearly $50 million in emergency spending.

“Principals are in positions of public trust and have an obligation to act in the best interest of their schools and the children … they represent,” Jarod Koopman, IRS special agent in charge, said in a formal statement. “Those principals who line their own pockets through fraudulent means violate this trust by making the conscious decision to deprive teachers of the very resources necessary to provide quality education.”

The investigation centered on Norman Shy, 74, a supplies vendor.

Koopman and other authorities said Shy conspired with 13 school officials from 2002 to 2015 to submit fraudulent invoices for more supplies than he delivered. The principals are thought to have approved the invoices in return for bribes and kickbacks from Shy.

“It is extremely disappointing when greed and selfishness deteriorate the communities and future possibilities of our youth,” Koopman said.

Koopman and Dave Gelios, special agent in charge at the FBI’s Detroit field office, conducted the investigation that uncovered what they said was $2.7 million in fraudulent invoices.

“Here we have yet another problem to add to the litany of issues emanating from Detroit public schools,” Lindsey Burke, The Heritage Foundation’s Will Skillman fellow in education policy, told The Daily Signal in an email, adding:

These significant allegations of corruption add to a long list of problems: Just 8 percent of Detroit public school eighth-graders can read proficiently, according to the National Assessment of Educational Progress; just 3 percent are proficient in math. Fewer than seven in 10 students graduate.

State Rep. Sherry Gay-Dagnogo, D-Detroit, told The Daily Signal in a phone interview that she is “very disappointed” by the charges. Gay-Dagnogo said she began her own career in Detroit public schools under one of the officials named in the indictment.

“Just to hear [about the indictments], at the time when we are in the biggest fight of our lives to sustain the Detroit public schools … it was just a gut punch,” the former teacher added.

“There are definitely questions now,” Gay-Dagnogo said of the funds.

“Local officials in Detroit want more power and a handout from the state,” Cotter said in a formal statement. “But House Republicans want assurances that nothing like this can ever happen again. Serious financial and academic reforms, including state oversight, must be enacted in Detroit before one more dollar is spent trying to prop up this failing district.”

Gay-Dagnogo said fiscal oversight alone, such as through an emergency manager, has not improved the school system because schools stay the same internally.

“We need increased transparency, shared responsibility, and we need to take a look at what’s actually taking place,” she told The Daily Signal.

Instead of consigning poor children to the public schools within Detroit, families should have options in where and how their dollars are spent. Funds should follow a child to any school of choice, enabling families to find options that match their children’s unique learning needs, and increasing transparency in education spending.

Examining Michigan’s Blaine Amendment would be a good place for lawmakers to start, Burke said. The amendment, originally designed to prevent funding from going to “sectarian” schools, is now used to prevent public funding from following students to religious schools of their choice.

Ben DeGrow, director of education policy at the Michigan-based Mackinac Center for Public Policy, told The Daily Signal in an email that he recommends a student-based budgeting system, basic financial controls, and getting districts out of costly union and vendor contracts, among other reforms.

“The latest news of corrupt financial dealings in [Detroit public schools] provides more evidence that the district operates according to the principle of what works best for adults, rather than what works best for the students it’s supposed to serve,” DeGrow said, adding:

In that respect, it’s a reflection of the larger political debate about how to reform education in Detroit. Some leaders are focused on rescuing and restoring an institution that has failed many thousands of students, when there should be more talk about what drastic steps need to be taken to give families more real options and students a better shot at future successes.