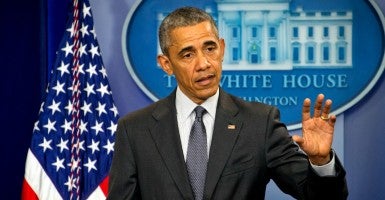 Obama has not really stopped U.S. businesses from migrating abroad. Instead, every U.S. business is a much more inviting takeover target by foreign businesses. (Photo: AdMedia/Newscom)

The U.S. tax system makes it extremely difficult for international businesses to compete in the global market.

A prominent and recent example of the lengths American businesses will go to escape our anticompetitive system is Pfizer, a large U.S. pharmaceutical manufacturer. Pfizer recently tried to merge with Allergan and locate the newly formed business’s headquarters in Allergan’s home country of Ireland. This is known as an inversion.

By doing this, Pfizer would’ve escaped from the onerous U.S. tax system that taxes the company on all the income it earns around the world, rather than only the income it earns domestically. Only six other countries in the 34-member Organization for Economic Cooperation and Development (OECD) tax companies’ income earned outside their borders. Of these, all of them have much lower tax rates than the U.S., which makes that extra taxation less relevant for their businesses. The U.S. is an outlier.

Pfizer’s proposed merger with Allergan was legal. It met all the criteria relevant to inversions in the tax code at the time the deal was announced. But a major U.S. business like Pfizer fleeing our shores because of our outdated tax system was too much for the Obama administration to stand.

When the recent wave of inversions hit starting back in 2014, the Obama administration, through the Treasury Department, started releasing new rules meant to curb inversions. It took this route instead of working with Congress to modernize the business tax system to lessen the tax-motivation for inversions.

The first two sets of rules released in 2014 and 2015 had the Treasury putting its toes in the water to test its authority. The rules in those releases were speed bumps for inverting companies. They were never going to stop inversions outright.

In response to the Pfizer deal, however, Treasury took a gigantic step further. It released a third set of rules this week that are significantly stronger. Again, the administration is not trying to fix the problems with the business tax system. Their aim is intended to stop the Pfizer deal, while sending a signal to other companies that may also want to engage in similar deals. And stop it they did. Pfizer and Allergan called off the deal as a result of the new rules.

The new rules stopped the Pfizer deal because they were retroactive and were tailored to make the facts and circumstances of this particular deal fall outside the parameters they set. This is an abuse of Treasury’s powers.

The new rules also apply to earnings stripping, the practice of increasing the debt burden of a U.S. business to reduce its taxable income and move that income to a lower-taxed country. They do this by granting Treasury the authority to reclassify debt as equity. This also stretches Treasury’s authority.

What’s even more troubling is that the Treasury doesn’t seem to have thought through the implications of giving itself this new power. The move could have significant negative economic ramifications beyond inversions.

The Obama administration is probably happy to have stopped the Pfizer deal—and the company will remain a U.S. business—but for how long?

It could strike another deal or resurrect the Allergan deal in a few months when the new regulations will have less of an effect on the deal. The Treasury rules look three years back at Allergan’s merger activities before the inversion. That window ends in October. And the Obama administration has probably slowed other potential inversions because it has shown it will use the full extent, and possibly beyond the full extent, of its authority to stop them. Future inverters will think long and hard before possibly incurring this administration’s wrath.

However, the business tax system remains a burden on U.S. businesses, and that means American workers continue to suffer from fewer jobs and lower wages because the Obama administration won’t work in good faith with Congress to fix it.

Even worse, the Obama administration has not really stopped U.S. businesses from migrating abroad. Instead, it has now made every U.S. business a much more inviting takeover target by foreign businesses. Rather than a new major inversion, the next big shoe to drop will likely be the outright purchase of an iconic U.S. business by a foreign business, similar to what happened when the Belgian company InBev bought Anheuser-Busch back in 2008.