Mississippi Is on the Right Side of History 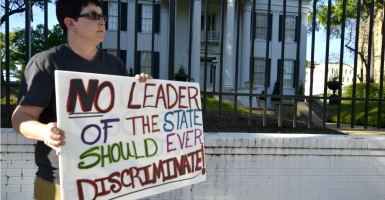 Lawmakers in Mississippi took a stand for the First Amendment this week, and the usual suspects aren’t happy.

Liberal politicians, LGBT activists, and big business are all in a tizzy, claiming discrimination where absolutely none exists and completely misrepresenting this commonsense law in hopes of bullying the state to reverse its decision.

Here’s the scenario: Thanks to a Supreme Court ruling last summer, same-sex marriage is now legal in all 50 states. The new Mississippi law does nothing to change that. As a matter of fact, this new law does not take away any right from anyone.

Instead, it protects something we used to cherish in this country—our rights under the First Amendment.

It simply says the government can’t force ministers or religious organizations or private business owners to participate in such activities if doing so violates their religious beliefs.

But apparently the whole “live and let live” mantra we’ve heard from the left for years doesn’t go far enough. They don’t just want their rights, which they now have; they want to strip away the religious freedom rights of fellow citizens and force them to approve and participate.

Some liberal governors are now saying they won’t allow their state employees to travel to Mississippi on official business. Well-known companies are threatening economic sanctions and boycotts because they don’t like the law.

Gov. Phil Bryant and the Mississippi state legislature should be applauded for not caving to such pressure and for not selling out the First Amendment rights of their citizens for a pot of “intolerance” porridge.

Mississippi is on the right side of history. By standing up for our Constitution and the First Amendment, the state is fighting to protect our rights of free speech and religious freedom—the very rights that throughout history have made the difference between a free society and one that isn’t.