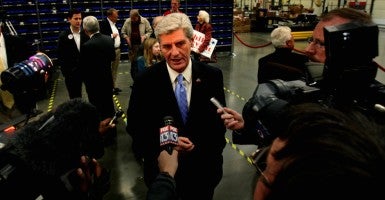 On Tuesday, Gov. Phil Bryant of Mississippi signed the Protecting Freedom of Conscience from Government Discrimination Act into law. To protect religious liberty in his state, he stood up against corporate bullies and leftist pressure groups.

The Republican governor should be an inspiration to lawmakers everywhere.

In the last few years, states and localities nationwide have prosecuted small businesses for declining involvement in gay marriage ceremonies. We’ve seen the government do some pretty terrible things, like Washington state trying to bankrupt a 70-year-old florist, or Oregon fining a bakery $135,000 and then placing a gag order on the owners to silence them.

We’ve even seen the most intolerant tendencies of the left’s rank and file when a pizza place in Indiana was threatened with violence for even discussing the possibility of not participating in a gay wedding celebration.

The message has been clear: It’s not enough to respect everyone, to live and let live. You must actively participate in ceremonies that go against your beliefs, or the government will punish you.

To make matters worse, whenever state legislatures have considered religious freedom bills to protect regular Americans from this intolerance, activist groups and massive corporations like Disney, Hilton, and Marriott have shown up and threatened boycotts, protests, and relocations. Recently, lawmakers in West Virginia and Georgia were cowed into shelving or vetoing these commonsense policies.

This is the toxic atmosphere of corporate bullying Bryant chose to fight. As he wrote in a signing statement:

I am signing HB 1523 into law to protect sincerely held religious beliefs and moral convictions of individuals, organizations and private associations from discriminatory action by state government or its political subdivisions […]This bill merely reinforces the rights which currently exist to the exercise of religious freedom as stated in the First Amendment to the U.S. Constitution.

A shocking amount of slanted news stories uncritically describe Mississippi’s new law as “anti-gay” or “discriminatory.” Nothing could be farther from the truth

A shocking amount of slanted news stories uncritically describe Mississippi’s new law as “anti-gay” or “discriminatory.” Nothing could be farther from the truth—you can read the details here. The law now simply protects religious organizations and a narrow slice of small businesses from being forced by government to engage in behavior that contradicts their deeply held beliefs. Nobody is being denied services because of who he is.

Bryant and the Mississippi state legislature have set a sterling example for other states seeking to protect the rights of all Americans. They did so in the face of vitriolic, misleading opposition from progressives and the corporations they use as instruments of bullying. This took real courage and deserves our praise.