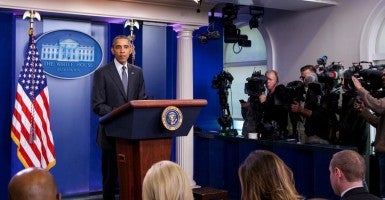 The failed policies of the last eight years have continued to lead the country down a path towards fiscal disaster. (Photo: Cheriss May/NurPhoto/Sipa USA/Newscom)

The Congressional Budget Office (CBO) has released its analysis of the’s 2017 budget proposal. As expected, CBO’s analysis of the administration’s latest proposal shows that it is bloated with more spending and a massive tax hike.

Under the president’s plan the size and scope of government would continue to grow at an unsustainable rate for the foreseeable future, driving the nation down a path towards fiscal disaster.

The Heritage Foundation’s “Blueprint for Balance” presents a conservative budget that would reign in wasteful and duplicative spending while protecting national priorities such as defense. It puts the economy back on the right path to ensure prosperity for all Americans and favoritism for none. Compared to the “Blueprint for Balance” the president’s budget:

Compared to CBO’s baseline budget projections, the president’s proposal would increase spending by more than $400 billion over the next decade. This is nearly $11 trillion higher than the level proposed by the “Blueprint for Balance”. The Country is on an unsustainable economic path and needs real leadership that will make tough choices about the Nation’s priorities instead of continuing the same failed policies of the past.

The president’s 2017 budget would raise revenues by nearly $2.8 trillion compared to CBO’s updated baseline projections. The Heritage proposal provides a tax cut of more than $1 trillion to help stimulate the economy and put America back on the right course. Compared to the “Blueprint for Balance”, the president’s budget would increase taxes by more than $4 trillion in the coming decade.

CBO has said as recently as January that the Country’s level of debt is on an upward path relative to the size of the economy and would ultimately be unsustainable.

While the president’s budget presents a better forecast than CBO’s projections, it does not do nearly enough to bring the debt and deficit under control. The improvement in debt and deficit under the proposal can solely be attributed to the $2.8 trillion tax increases that it includes. It makes no reforms to spending programs and instead continues to increase spending in the next decade.

The “Blueprint for Balance” would reduce the deficit by an additional $6.7 trillion over the next decade compared to the president’s plan. Debt held by the public would be almost $7 trillion lower in nominal figures and 25 percent lower as a share of the economy by 2026. Congress cannot tax its way out of the impending financial crisis. There must be real sustainable spending reforms to entitlement and non-core government programs. The “Blueprint for Balance” presents numerous options for both.

In the 2017 fiscal year the president’s budget would abide by the $1,070 billion discretionary spending limit set by the Bipartisan Budget Act of 2015. Not including an accounting gimmick known as Changes in Mandatory Programs, the proposal would spend $1,090 billion on discretionary programs in 2017, $100 billion more than the “Blueprint for Balance.”

The president’s budget provides $552 billion in base defense funding for 2017, $48 billion less that the level proposed in the “Blueprint for Balance”. It also provides $15 billion of $74 billion in Overseas Contingency Operations funding for non-defense programs.

Diverting funds from forces on the ground for other purposes compromises the safety and security of American troops. The president’s budget should prioritize defense spending over non-defense spending and utilize those savings to ensure that national defense can be funded robustly. The “Blueprint for Balance” would better equip our military to face mounting challenges across the globe.

The failed policies of the last eight years have continued to lead the country down a path towards fiscal disaster. The president’s latest budget proposal shows that if he were to have his way, this trend will continue for years to come.

The “Blueprint for Balance” throws out the failed policies of the past and reverses course, making meaningful reforms and putting America back on a sustainable economic course. It’s time for new leadership and a new approach.