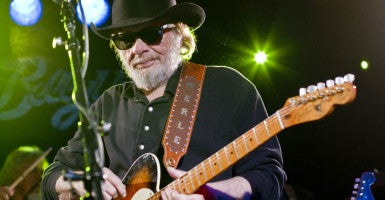 “I think they ought to put his face on Mount Rushmore," Merle Haggard, who died Wednesday, once said of Ronald Reagan. (Photo: Daniel Knighton/Zuma Press/Newscom)

“He was a wonderful man in my life. He gave me a second chance at life in the form of the pardon he gave me,” Haggard said in a CMT interview after Reagan’s death in 2004.

Haggard, an acclaimed songwriter and performer, was a member of the Country Music Hall of Fame and one of the most influential figures in popular music —not just in country circles.

Haggard died at home in Northern California on the morning of his 79th birthday, his agent told reporters. Diagnosed with lung cancer in 2008, he had battled pneumonia since December.

Born into a poor family in 1937, Haggard spent his youth as a small-time criminal before serving time in San Quentin State Prison for burglary. After being paroled in 1960, he successfully pursued a music career.  His hits in the 1960s included  “Branded Man,”  “Mama Tried,” “Workin’ Man Blues,” “The Bottle Let Me Down,” “The Fightin’ Side of Me,” and, of course, “Okie From Muskogee.”

In 1972, Haggard received a full pardon from Reagan, then governor  of California. Officials determined he had been improperly convicted.

“God, it meant everything,” Haggard told CMT of Reagan’s decision to grant him the full pardon.

Many of his most memorable songs followed the pardon, including “Today I Started Loving You Again,”  “If We Make It Through December,” “Big City,” “Pancho and Lefty,” “I Think I’ll Just Stay Here and Drink,” “Living With the Shades Pulled Down,”  and “Are the Good Times Really Over.”

Haggard got the opportunity a decade after the pardon to perform for the man who cleared his record, as The New York Times reported in 1982. Reagan had been elected president 16 months earlier, and the occasion was a concert at a ranch adjoining the Reagan ranch in Santa Ynez Valley, Calif.

Reagan, the newspaper reported, said through a spokesman that although “Merle Haggard’s music is now the heart and soul of America,” the pardon was “routine” and had simply “come up through the system.”

“I had a chance to thank him personally for the pardon and meet Nancy and have dinner with him. I sat on the right-hand chair next to the president, so I felt really honored. He treated me like royalty,” Haggard said years later in the CMT interview.

He described Reagan as “the epitome of everything we would want a president to be.”

“I think they ought to put his face on Mount Rushmore. I think he’s done that much. He’s the president of the century.”

This article has been modified to correct the location of  Haggard’s performance for President Reagan and to reflect the fact that Reagan was quoted through a spokesman.