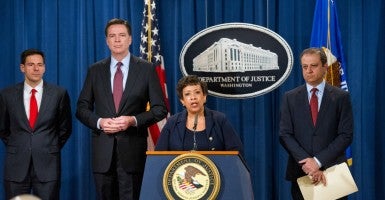 On March 24, the Department of Justice indicted seven Iranian hackers for two cyber-crimes. The charges result from the individuals’ attacks on U.S. bank websites and the breach of a New York dam’s control systems.

If the Justice Department truly desires to make its point known on cyber-hacking, it should shine a light on Iran’s misdoings—not delay the truth as a favor to the administration.

Even though the indictment was just released to the public, it had originally been announced but then immediately sealed the same week the U.S. and Iran were implementing agreements regarding Iran’s nuclear program—in addition to negotiating the release of four American prisoners and compensation of $1.7 billion back to Iran.

Attorney General Loretta E. Lynch stated last week that “the Department of Justice is sending a powerful message: that [they] will not allow any individual, group, or nation to sabotage American financial institutions” and that the charges illustrate cyber-hacking or attacks of any sort will not be tolerated by the U.S. government.

While that may be true, it also appears that the Department of Justice wanted to keep the public in the dark on Iran’s cyber-crimes while the administration pursued building a relationship with the regime. If the Justice Department truly desires to make its point known on cyber-hacking, it should shine a light on Iran’s misdoings—not delay the truth as a favor to the administration.

Meanwhile, Iran’s cyber-capabilities have been growing exponentially for the past six years. Victims of past Iran-based cyber-attacks include not only U.S. military and private sectors, but also international allies.

According to the official indictment:

The attacks disabled victim bank websites, prevented customers from accessing their accounts online and collectively cost the victims tens of millions of dollars in remediation costs as they worked to neutralize and mitigate the attacks on their servers.

Iran has been exponentially increasing its cyber-capabilities since 2010. These successful attacks, along with Iran’s growing cyber-program, should be of concern despite the administration’s growing complacency with the regime.

Two teams from two separate Iran-based companies named “ITSecTeam” and “Mersad,” which are both affiliated with Iran’s Islamic Revolutionary Guard Corps, launched cyber-attacks on the U.S. from 2011 to 2013.

The ITSecTeam and Mersad team created malicious code to find and take over computers to use for their attacks. They even went through the process of procuring U.S.-based computers to launch their attacks from within the U.S.

Beginning in August of 2013, one of the hackers from ITSecTeam even gained illegal access into Bowman Dam’s online system located in Rye, N.Y. Luckily, the infiltration proved unsuccessful because the dam’s water level controls had been manually shut down for maintenance during that time.

These cases prove the serious threat Iran poses to the United States.