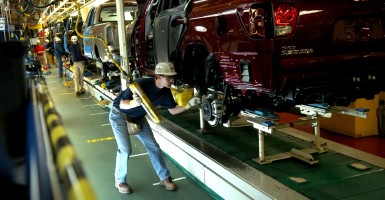 One of the most persistent myths about international trade is that American manufacturing workers can’t compete with foreign workers who are paid much less.

That pessimistic view seemed to be confirmed earlier this year, when Carrier announced plans to move 2,100 jobs from Indianapolis to Mexico. Every time a U.S. manufacturing facility closes, it’s headline news.

But here’s the part of the story many people never hear. Although Indiana is losing 2,100 jobs to Mexico, over 100,000 Hoosiers who work in manufacturing are employed by foreign-owned companies. Toyota is adding 300 jobs to its Princeton plant, Honda is adding 100 new jobs in Greensburg, and Subaru is adding 1,200 new jobs to its facility in Lafayette.

While Carrier has been called “greedy” for moving to Mexico, no one in Indiana is calling Toyota, Honda, or Subaru greedy for choosing to invest in the United States.

The United States should strive to attract more job-creating investment, not adopt protectionist policies that could scare it off.