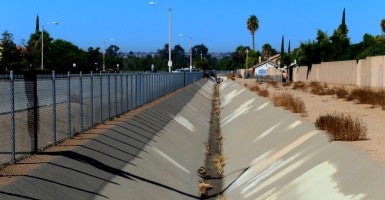 The Clean Water Act drastically limits the rights of landowners to build or develop on land that constitutes “waters of the United States.” (Photo: Istockphoto)

On March 30, the Supreme Court heard arguments in U.S. Army Corps of Engineers v. Hawkes Co. This case is one of a collection of land use cases that trickle into the Court from time to time, all representing the same problem: The Clean Water Act drastically limits the rights of landowners to build or develop on land that constitutes “waters of the United States” (WOTUS). Unfortunately, the term “waters of the United States” is left undefined.

This leads to what, in many cases, appears to be “interpretation via whim” by the U.S. Army Corps of Engineers—the agency tasked with issuing regulations to implement the Clean Water Act. The Corps of Engineers regulations are notoriously ambiguous, complex, and expensive to comply with. According to one study, obtaining a permit costs an average of $270,000 and takes more than two years.

The regulations themselves stretch the imagination in terms of what constitutes a “wetland.” Just consider some of the more absurd scenarios that have been litigated over the years.

In 1987, a Hungarian immigrant named John Pozsgai bought property that had formerly been an illegal auto dump. His efforts to clean up the dump were halted by the Army Corps of Engineers and the Environmental Protection Agency (EPA), who claimed the property as a wetland. Poszgai was sentenced to three years in prison for “discharging pollutants into waters of the United States,” was fined $200,000, and was under supervised probation for five years. The family later went bankrupt and lost the property.

More recently, the Supreme Court heard the case of Mike and Chantelle Sackett, who were slapped with $75,000-a-day fines and no legal recourse simply for trying to build a house on a dry tract of property among homes that already existed there. The permit they required the Sacketts to obtain cost more than the value of their land. In a unanimous decision, the Supreme Court ruled that the Sacketts could challenge the EPA’s decision in court.

Finally, in 2012, the Corps of Engineers and the EPA ended a 22-year, $5.5 million fight with an 80-year-old Massachusetts cranberry farmer and Korean War veteran, Charles Johnson. Johnson wanted to expand his cranberry farm. It turns out that he can do so—but only after he pays a $75,000 fine.

In the Hawkes case now before the Supreme Court, the justices must again decide if the Corps of Engineers bureaucracy is empowered to make a finding against private landowners that has the force of law. In this case, the “wetland” in question is 120 miles away from the nearest navigable water.

In a country built on legal clarity, rational justice, and the right to private property, the regulations and enforcement actions of the Corps of Engineers are borderline Kafka-esque. Unfortunately, there is unlikely to be a conclusive ruling from the Supreme Court anytime soon. As long as “waters of the United States” is left undefined by Congress, there is ample opportunity for the Army Corps of Engineers to argue that it can rule the roost on these issues.

In Sackett v EPA, Justice Samuel Alito noted this singular problem. In his concurrence with the majority opinion, he wrote that to truly fix this issue, Congress must “do what it should have done in the first place: provide a reasonably clear rule regarding the reach of the Clean Water Act.”

Unfortunately, members of Congress do not seem to share Alito’s urgency. In fact, Congress has done so little to fix the WOTUS issue that the EPA has taken up the mantle of attempting to define “waters of the United States.” As one might imagine, their interpretation leaves much to be desired in the way of protecting property rights. In fact, the Government Accountability Office recently found that the EPA, in their haste to applaud themselves, engaged in “covert propaganda” while promoting their proposal.

Congress has managed to muster itself to take one action: passing a bill to block the implementation of the EPA’s new rule. This does not go nearly far enough. If Congress is truly going to solve this problem—and protect the millions of beleaguered landowners who are daily subject to the Army Corps of Engineers’ aggressive enforcement of arbitrary regulations—they must redefine the “waters of the United States” within the statute itself.

Should they need a bit of help finding a proper definition, the late Justice Antonin Scalia left them a useful starting point. Writing for a four-justice plurality in Rapanos v. United States, Scalia outlined the parameters for what he thought should constitute “waters of the United States”: “only those relatively permanent, standing or continuously flowing bodies of water ‘forming geographic features’ that are described in ordinary parlance as ‘streams,’ ‘oceans, rivers, [and] lakes.’”

Essentially, it suggests that to be a wetland that falls under federal jurisdiction, the land must actually walk and talk like a wetland. At a minimum, any definition of WOTUS should take a cue from Scalia’s definition and be limited to traditional navigable waters—those waters that can be traversed by boats.