Supreme Court Got It Wrong: Noncitizens Shouldn’t Be Counted 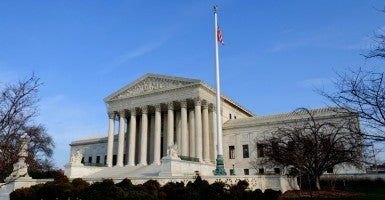 In a loss for voters, the Supreme Court has ruled unanimously against two residents of Texas who had argued that the Texas legislature diluted their votes when it used total population to redraw state Senate districts.

In Evenwel v. Abbott, the Supreme Court allowed states to use total population in redrawing district lines, even though that this includes a large number of noncitizens (legal and illegal), felons, and others who are ineligible to vote.

This is a particular problem in Texas, which has almost two million illegal aliens, about seven percent of the state’s population.

Sue Evenwel and Edward Pfenninger challenged the state Senate districts drawn by the Texas legislature using total population in 2013. They claimed that both the number of citizens of voting age and the number of registered voters in their districts deviated substantially—between 31 and 49 percent—from the “ideal” population of a Texas Senate district. They argued that this disparity significantly diluted their votes in comparison to those of voters who live in districts with large numbers of non-voters.

This is a particular problem in Texas, which has almost two million illegal aliens, about seven percent of the state’s population.

‘One Person, One Vote’

By way of background, state legislatures reapportion voting districts for their state and federal representatives following each decennial Census. The guiding principle for states—“one person, one vote”—requires that all voters have approximately equal voting power.

This principle comes from a line of cases decided by the Supreme Court in the mid-1960s. Prior to that time, the court had refused to intervene in redistricting controversies, claiming that it was a “political question” the courts should not consider.

According to the court, the “one person, one vote” principle that it read into the Fourteenth Amendment’s Equal Protection Clause requires that “seats in both houses of a bicameral state legislature must be apportioned on a population basis.”

The court never defined what population basis states could use. When the court previously declined to hear a 2001 case similar to Evenwel v. Abbott, Justice Clarence Thomas observed that the court “left a critical variable … undefined … the relevant ‘population’ that States and localities must equally distribute among their districts.”

Before the Supreme Court’s creation of the “one person, one vote” principle, many states had refused to redistrict for more than half a century, despite a dramatic nationwide population shift from rural to urban areas.

These state legislatures were dominated by rural legislators, who were not willing to reapportion and lose their power and control. The “one person, one vote” principle led to legislative districts being redrawn in nearly every state and urban areas gaining a large number of legislative seats.

Today, lawmakers from urban areas dominate many state legislatures the way rural areas used to because of the huge influx of noncitizens, both legal and illegal, into predominantly urban settings. The court’s decision in Evenwel is a refusal to correct this problem, in sharp contrast to what it did 60 years ago when the situation was reversed.

Claims of vote dilution have been the driving force of redistricting cases for decades, and the court has affirmed dozens of judgments against states and local governments for diluting the votes of its minority residents. Yet in Evenwel v. Abbott, the court failed to enforce its “one person, one vote” principle evenhandedly. With this ruling, the Supreme Court has sanctioned states’ dilution of citizens’ votes.

The majority also pointed out:

[N]onvoters have an important stake in many policy debates … and in receiving constituent services, such as help navigating public-benefits bureaucracies. By ensuring that each representative is subject to requests and suggestions from the same number of constituents, total-population apportionment promotes equitable and effective representation.

The problem with that analysis is that noncitizens, particularly illegal aliens, are not entitled to any representation, constituent services, or public benefits. Their presence distorts the redistricting and apportionment process and shifts political power in a way that is fundamentally unfair to citizens, both those eligible to vote and those, like children, who are not eligible.

There is also no credible basis for the claim that representatives would choose to vary the amount of help they give to constituents depending on how large the population is in their districts.

Justices Clarence Thomas and Samuel Alito agreed with the majority’s conclusion but not its reasoning. Writing separately, Thomas noted that the court has never provided a sound basis for the “one person, one vote” principle and has struggled to define what that principle protects. Thomas concluded that Evenwel and Pfenninger are right that the court’s “one person, one vote” precedents are based on “the theory that eligible voters have a right against vote dilution.” In his view, the majority’s reasoning “rests on a flawed reading of history and wrongly picks one side of a debate that the Framers did not resolve in the Constitution.”

Alito pointed out one of the only redeeming features of this decision. Texas asked the court to also rule on whether states “are not barred from using eligible voter statistics” to draw boundary lines instead of total population.

This question “implicates very difficult theoretical and empirical questions about the nature of representation.” Alito stated the court has “no need to wade into these waters in this case” and can consider it “if and when” the court gets a redistricting plan that “uses something other than total population as the basis for equalizing the size of districts.”

State legislatures should consider changing their rules and laws governing redistricting to make citizen population the standard for drawing legislative districts, not total population. That is the best way to protect the value of citizens’ right to vote.