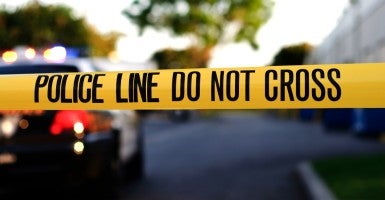 It is time for gun-control ideologues to take a step back and stop whittling away at the Second Amendment. (Photo: Istockphoto)

According to proponents of gun control, more guns in America equals more murders and a more lawless society. Every time there is a mass killing involving guns, liberal politicians rush to call for more restrictions on guns.

Those in favor of disarming the citizenry claim that fewer guns will mean less gun crime. This assertion is not based on facts, as can be seen in the chart below. Not only is there no correlation between increases in gun ownership and homicides, but the relationship in fact is negative. A 2007 study in the Harvard Journal of Law & Public Policy entitled “Would Banning Firearms Reduce Murder and Suicide?” looked at firearms prevalence and violence in countries around the world. The authors found that gun bans are ineffective because they do not affect the socio-cultural and economic factors that are the real determinants of violent crime rates. Their study concludes:

[T]he burden of proof rests on the proponents of the more guns equal more death and fewer guns equal less death mantra, especially since they argue public policy ought to be based on that mantra. To bear that burden would at the very least require showing that a large number of nations with more guns have more death and that nations that have imposed stringent gun controls have achieved substantial reductions in criminal violence (or suicide). But those correlations are not observed when a large number of nations are compared across the world.

It is time for gun control ideologues to take a step back and stop whittling away at the Second Amendment.

This piece has been updated to state that the study, “Would Banning Firearms Reduce Murder and Suicide?” was published in 2007.