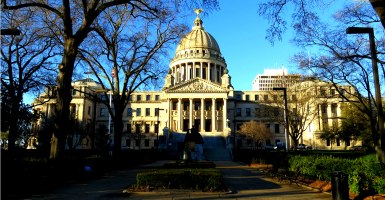 The bill makes clear that the government cannot take any adverse action against any organization that makes access to sex-specific facilities such as bathrooms and locker rooms based on biological sex. (Photo: Sean Marshall / Flcikr/ CC BY-NC 2.0)

This morning, the Mississippi House passed a bill, HB 1523, protecting religious freedom. If the House disposes of a procedural maneuver that has delayed a final vote until Monday, the bill will go to the governor’s desk for his signature, as the Senate passed the bill earlier this week. The bill is good policy and the governor should sign it.

HB 1523, “Protecting Freedom of Conscience from Government Discrimination Act,” is based on the principle of protecting minority rights after major social change. In other states where marriage had been redefined, citizens and religious organizations who continued believing that marriage was a union of husband and wife have been penalized by the government. Bakers and florists have been fined, adoption agencies shuttered. So the citizens of Mississippi have acted to make sure it never happens in their state. In the aftermath of the Supreme Court’s redefinition of marriage, they’re working to protect their civil liberties.

It’s what Americans did after Roe v. Wade, too. Congress and the states have passed a variety of laws that protect pro-life conscience. In Roe v. Wade the Supreme Court invented a right to an abortion. But after Roe legislatures made clear that government cannot require a pro-life doctor or nurse to perform an abortion—that they, too, had rights that required specific protections from hostile judges and bureaucrats.

Likewise, in the Obergefell decision, the Supreme Court redefined marriage throughout America by mandating that governmental entities treat same-sex relationships as marriages. The Supreme Court did not say that private schools, charities, businesses, or individuals must abandon their beliefs if they disagree, but some governments are acting as if it did.

That’s what HB 1523 would prevent. It protects the freedom of conscience for people who believe any of the following three things: 1) that marriage is the union of husband and wife, 2) that sexual relations are reserved for marriage, and 3) that our gender identity is based on our biology. It doesn’t say anyone has to believe these things, it just says that if someone does believe them, the government can’t discriminate against them. So the bill takes nothing away from anyone, it simply protects pluralism.

>>>> For More on This, See Ryan T. Anderson’s New Book, “Truth Overruled: The Future of Marriage and Religious Freedom.”

When it comes to professionals, HB 1523 says that the government can never discriminate against a surgeon, psychiatrist or counselor because they decline to do sex-reassignment surgery or decline to do marriage counseling for a same-sex marriage. The bill makes clear, however, that it cannot be used to deny visitation or proxy decision making to a same-sex spouse, nor to deny any emergency medical treatment required by law. Likewise, under HB 1523 the government could never penalize a photographer, baker or florist who declined to help celebrate a same-sex wedding.

As for government employees, HB 1523 strikes a reasonable balance. It says that the government cannot discriminate against employees for speech or conduct they engage in in their personal capacity outside of their job responsibilities when it comes to these three beliefs.

Inside of work, it says the government can’t signal out these viewpoints for particular sanction—that employees must abide by common “time, place, and manner” regulations, but no content restrictions on speech at work. It also says that a government employee may seek a recusal from issuing marriage licenses, provided they do it ahead of time and in writing, and provided they “take all necessary steps to ensure that the authorization and licensing of any legally valid marriage is not impeded or delayed.” A commonsense win-win outcome.

Finally, the bill makes clear that the government cannot take any adverse action against any organization that makes access to sex-specific facilities such as bathrooms and locker rooms based on biological sex.

Hopefully we will not see a repeat of Indiana and Georgia in Mississippi. Big business and special interests should not attack the state or this bill.

When the bill reaches his desk, the governor should sign it into law, and other states should follow Mississippi’s lead.