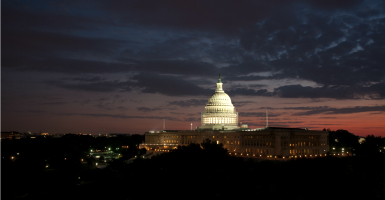 The U.S. has been moving down the path of administrative government in fits and starts from the initial Progressive Era reforms through the New Deal’s interventions in the economy. (Photo: USCapitol)

Matthew Spalding is the associate vice president and dean of educational programs for Hillsdale College in Washington, D.C., where he oversees the Allan P. Kirby Jr. Center for Constitutional Studies and Citizenship.

“In framing a government which is to be administered by men over men, the great difficulty lies in this,” Madison writes in Federalist 51, “You must first enable the government to control the governed; and in the next place oblige it to control itself.”

That meant that, in addition to performing its proper constitutional functions, there needed to be an internal check to further limit the powers of government. For that purpose, the Founders not only divided power, but also set it against itself.

This separation of powers is the defining structural mechanism of the Constitution. It divides the powers of government among three branches and vests each with independent powers and responsibilities.

“The accumulation of all powers,” Madison notes in Federalist 47, “legislative, executive and judiciary, in the same hands, whether of one, a few, or many, and whether hereditary, self-appointed, or elective, may justly be pronounced the very definition of tyranny.” Thus, for “the preservation of liberty,” each branch has only those powers granted to it, and can do only what its particular grant of power authorizes it to do.

The separation of powers and legislative checks and balances discourage the concentration of power and frustrate tyranny. At the same time, they require the branches of government to collaborate and cooperate, limiting conflict and strengthening consensus.

The Rise of Central Administration

The U.S. has been moving down the path of administrative government in fits and starts from the initial Progressive Era reforms through the New Deal’s interventions in the economy. But the most significant expansion occurred more recently, under the Great Society and its progeny.

When administration is nationalized, though, it does not easily or naturally fall under the authority of one branch or another. As we’ve seen, bureaucracy and its control created a new source of conflict between the executive and legislative branches.

During the first part of our bureaucratic history, Congress had the upper hand. Congress, after all, had been creating these regulatory agencies to carry out its wishes and delegating its legislative powers to them in the form of broad regulatory authority.

Congress was the first to adapt to the administrative state, continuously reorganizing itself since 1970 by committees and subcommittees to oversee and interact with the day-to-day operations of the bureaucratic apparatus as it expanded.

Today, when Congress writes legislation, it uses very broad language that turns extensive power over to agencies, which are also given the authority of executing and usually adjudicating violations of their regulations in particular cases. The result is that most of the actual decisions of lawmaking and public policy — decisions previously the constitutional responsibility of elected legislators — are delegated to bureaucrats whose “rules” have the full force and effect of laws.

In 2014, about 220 pieces of legislation became law, amounting to a little more than 3,000 pages of law, while federal bureaucrats issued 79,066 pages of new and updated regulations. The modern Congress is almost exclusively a supervisory body exercising post-legislative oversight of administrative policymakers.

Modern administrative bureaucracies consolidate the powers of government by exercising the lawmaking power, executing their own rules and then judging their application in administrative courts, binding individuals not through legislative law or judicial decision, but through case-by-case rulemaking based on increasingly broad and undefined mandates, all the while less apparent and accountable to the political process and popular consent.

The consequences of the administrative state’s lack of accountability have been made much more severe by Congress’ current inclination to deal with every policy issue through “comprehensive” legislation.

Congress has ceased to tackle distinct problems with simple laws that can be deliberated upon and then made known to the public. Instead, for everything from health care to financial restructuring to immigration reform, Congress proposes labyrinthine bills that that extend to every corner of civil society and impose an ever more complicated and expansive administrative apparatus upon a public that has no way to understand the laws it will be held accountable for.

The Affordable Care Act is a perfect example. This law transferred massive regulatory authority over most health-care decision making to a collection of more than 100 federal agencies, bureaus and commissions.

Likewise, the Dodd-Frank Wall Street Reform and Consumer Protection Act requires administrative rulemakings reaching not only to every financial institution, but well into every corner of the American economy. Its new bureaucracies, like the Consumer Financial Protection Bureau and the Financial Stability Oversight Council, operate outside of the public eye and are subject to virtually none of the traditional checks.

The Consumer Financial Protection Bureau is literally outside the rule of law. It has an independent source of revenue, insulation from legislative or executive oversight and the broad latitude and discretion to determine and enforce its own rulings.

The rise of the new imperial presidency—acting by executive orders more than legislative direction—should come as no surprise, then, given the overwhelming amount of authority that has been delegated to decision-making actors and bodies largely under executive control.

Modern executives can command the bureaucracy to implement new policies without the cooperation of Congress by abusing executive discretion, by exploiting the vagaries of poorly written laws, and by willfully neglecting and disregarding even laws that are clear and well-crafted.

By acting unilaterally without or even against the authority of Congress, the executive assumes a degree of legislative powers without legislative accountability.

Once it has been established that the president with “a pen and a phone” can govern by executive orders and regulations without Congress, it will prove difficult and perhaps impossible to prevent future executives from following this lawless path.

It may be a prudent option at this point to assert checks and balances through litigation.

A successful lawsuit could prevent things from getting worse, but the legislative branch’s going to the judicial branch to solve its disagreements with the executive branch is not going to solve the problem.

If Congress’ turning to litigation to assert its constitutional prerogative becomes the norm, it would have the perverse (and unintended) effect of further nullifying the institutional powers of Congress.

The only way to reverse the trend of a diminishing legislature and the continued expansion of the bureaucratic executive is for Congress to strengthen its constitutional muscles as a co-equal branch of government.

Thus, the first step toward restoring the structural integrity of the Constitution is for Congress to reassert its legislative authority and, as much as possible, to cease delegating what amounts to the power to make laws to administrative agencies.

Congress needs to relearn the art of lawmaking. It must regain legislative control over today’s labyrinthine state through better lawmaking up front and better oversight after the fact.

Regular legislative order, especially the day-to-day, back-and-forth of authorizing, appropriating and overseeing the operations of government, will do more than anything else to restore the Article I powers of Congress and restore legislative control over today’s unlimited government.

The one place where the power of Congress is not entirely lost—and where there’s opportunity for gaining leverage over an unchecked executive—is Congress’ power of the purse.

Used well, it would also prevent Congress from continually getting cornered in fights over incomprehensible omnibus budgets at the end of every fiscal year, the settlement of which advantages the executive.

Strategically controlling and using the budget process will turn the advantage back to Congress, forcing the executive to engage with the legislative branch and get back into the habit of executing the laws enacted by Congress.

If Congress does not act to correct the growing tilt toward executive-bureaucratic power, the structure of our government will be fundamentally—and perhaps permanently—altered.

It’s still possible for Congress to restore its legislative powers, and to correct this structural imbalance. But Congress needs to act as a constitutional institution — indeed, the primary branch of constitutional government.

It must do so by putting down clear markers and drawing enforceable institutional lines before the inauguration of the next president—whoever that may be, and regardless of his or her political party.

This piece has been excerpted from testimony before the Executive Overreach Task Force for the House Judiciary Constitution and Civil Justice Subcommittee.