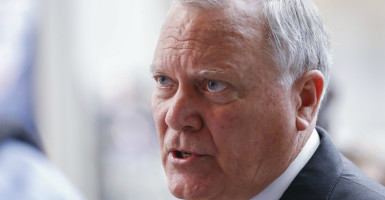 Giant corporations and organizations such as the National Football League, Coca-Cola, and the Walt Disney Co. threatened to pull business out of Georgia if Gov. Nathan Deal, above, signed the bill into law. (Photo: Erik S. Lesser /EPA/Newscom)

The sponsors of the religious liberty bill vetoed by Georgia’s governor say they are disappointed and disheartened by his action.

Gov. Nathan Deal, a Republican, vetoed the legislation—called the Free Exercise Protection Act—on Monday, saying the bill did not reflect Georgia’s image as a state full of “warm, friendly, and loving people.”

Sponsors said they intended provisions of the bill to provide “defenses and relief” to “protect religious freedoms” of Georgians who don’t want the government to force them to violate their faith.

State Rep. Kevin Tanner, a Republican, said in a statement provided to The Daily Signal that, with “all due respect to Governor Deal,” he is “disappointed in his decision.” Tanner said:

Many Georgians, particularly those in the faith community, had been asking for these protections for several years and it is disheartening to see their will overlooked. This is a setback to be sure, but I am confident that Georgians will continue to advocate for the freedom to worship as they choose.

Deal said the bill “can lead to discrimination even though it may be totally unintentional,” Chattanooga-based News Channel 9 reported.

The governor also said Georgians “do not need to discriminate against anyone in order to protect the faith-based community.”

State Sen. Greg Kirk, a Republican who sponsored the bill in the state Senate and encouraged the governor to sign it, wrote in a Facebook post that he respectfully disagrees with the veto.

“The Free Exercise Protection Act was a deliberately drawn piece of legislation that did not discriminate against the LGBT [community] and protected the faith community. In my opinion he gave into bullies!” Kirk wrote.

For weeks, LGBT activists targeted the legislation for defeat and secured the assistance of major businesses and liberal allies to achieve that. Opponents said the bill would allow discrimination against lesbian, gay, bisexual, and transgender residents.

Giant corporations and organizations such as the National Football League, Coca-Cola, and the Walt Disney Co. threatened to pull business out of Georgia if Deal signed the bill into law.

“The economic threats made by big businesses to get the government to do their bidding at the expense of the common good are examples of a vicious form of cultural cronyism,” Ryan T. Anderson, the William E. Simon senior research fellow at The Heritage Foundation, wrote for The Daily Signal.

Anderson said the vetoed bill “was the result of a series of compromises that significantly watered down the original version,” adding:

It did not offer protections to bakers, florists, and similar wedding professionals, and it adopted a very narrow definition of faith-based organizations, covering only churches, religious schools, and ‘integrated auxiliaries.’

The legislation, called H.B. 757 in the Georgia House of Representatives, included language protecting any “faith-based organization” from being required to provide services, including conducting marriage ceremonies, that it maintains would violate the First Amendment right to free exercise of religion.

Except as provided by state and federal law, the bill said such religious organizations would not be required to employ any person whose beliefs are “not in accord with the faith-based organization’s sincerely held religious belief.”

U.S. Rep. Jody Hice, R-Ga., who has served as a pastor for nearly 30 years, said in a prepared statement that he was “deeply disappointed” the governor didn’t sign the bill into law but “will continue to fight for religious liberty and First Amendment protections in Washington.”

To that end, Hice said, he is co-sponsoring the federal First Amendment Defense Act, which was introduced in June 2015 and sent to the House Ways and Means Committee.

In fact, all 10 Republican members of the 14-member Georgia delegation in the U.S. House of Representatives are co-sponsors of the First Amendment Defense Act. According to a summary, H.R. 2802 includes provisions that would prohibit the “federal government from taking discriminatory action” against those with a religious or moral conviction that “marriage is or should be recognized as the union of one man and one woman.”

U.S. Sen. Johnny Isakson, R-Ga., told Savannah-based WJCL-TV that he agreed with the governor’s veto of the religious freedom bill.

“Religious liberty is a constitutional guarantee,” Isakson said Wednesday. “The state carrying out individual legislation to define what that is, if you have 50 different bills, you have a lot of confusion, so I think the governor did the right thing.”

State Sen. Joshua McKoon, a Republican representing the Columbus area, voted for the bill and told WBUR Boston that he was “extremely disappointed” by Deal’s veto.

“This bill had been significantly watered down,” McKoon said. “It did not apply to businesses. I’m just very, very disappointed the governor would veto this modest protection for people of faith.”