Competition in Obamacare Exchanges Declined in 2016 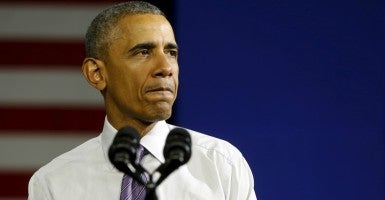 As for the president’s predictions that the exchanges would lower prices “for many,” three years later those claims haven’t proved true either. (Photo: Jonathan Ernst/ Reuters/Newscom)

A related report, issued by the office of U.S. Sen. Ben Sasse, R-Neb., looked at exchange competition at the county level. It found that in 2016, there is only one insurer offering exchange coverage in 225 counties (7.2 percent), another 915 counties (29.1 percent) have only two exchange insurers, and a further 841 counties (26.8 percent) have three competing insurers.

Thus, for residents of more than one-third of all U.S. counties (36.3 percent), exchange competition is limited to an insurer monopoly or duopoly, and almost two-thirds (63 percent) of U.S. counties have three or fewer insurers offering exchange coverage.

In response to these findings, “HHS argued there was no justification for excluding insurers who still offer plans off the exchanges.”

As noted, the president himself predicted that the exchanges would increase competition. Yet competition has declined even if insurers offering coverage outside the exchanges are included. The Government Accountability Office found that, at the state level, there were 1,235 insurers providing individual market coverage in 2013, and using the same methodology, the figure for 2016 is 960.

And as for the president’s predictions that the exchanges would lower prices “for many,” three years later, those claims haven’t proved true, either. In reality, premiums are up—in many cases, substantially—while choice and competition in most of the country are down.