3 Examples of Voter Fraud Across US 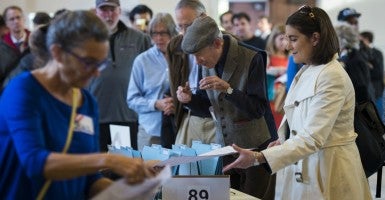 With the 2016 election season well underway, millions of voters across the country have already cast their ballots in primaries and caucuses. Republican and Democratic candidates are locked in close races for the highest office in the land, and every vote cast makes a difference.

The Heritage Foundation’s voter fraud database catalogues over 400 cases of proven voter fraud throughout America. Whether it be vote-buying, ineligible voting, false registrations, or fraudulent use of absentee ballots, the database makes clear that voter fraud is a real issue and one that must be effectively addressed—not denied, as some voter reform critics have done—in order to preserve the integrity of the electoral system.

Here are some recent additions to the database:

Robin Trainor pleaded guilty to two charges of voter impersonation fraud at the polls in the 2014 primary. While serving as judge of a polling place, Trainor went inside a voting booth with her husband to “assist” him—that is, she told him whom to vote for. Trainor then stepped out, falsely signed the election register under her son’s name, reset the voting machine, and cast a vote in his name. Trainor was placed on one year of probation and stripped of her right to vote for the next four years.

Derek Castonguay, a resident of Manchester, N.H., pleaded guilty to a charge of duplicate voting. Castonguay voted in the towns of Salem and Windham in the 2014 general election. Following his guilty plea, he was ordered to pay a $1,000 fine and received a 12-month suspended sentence. In addition to the fine and sentence, Castonguay was stripped of his right to vote.

Minnesota is an example of a state that had rampant voter fraud between 2008 and 2011. In that time frame, there were over 100 convictions for various voter fraud offenses throughout the state, including ineligible voting, false registrations, and fraudulent use of absentee ballots.

For those who deny the impact voter fraud may have on elections, consider that the 2008 Minnesota election unseated incumbent Republican Sen. Norm Coleman. Although it is impossible to know whether this rampant fraud changed the outcome of the election, it is worth remembering that the declared victor, Democrat Al Franken, became the sixtieth Democratic senator, creating a temporary filibuster-proof majority that paved the way for the ultimate passage of the Affordable Care Act.

These are just a few of the hundreds of documented examples of voter fraud that have occurred and continue to occur throughout the country due to lax laws and a lack of vigilance. For every case of voter fraud that is successfully discovered and prosecuted, there are undoubtedly many more that go undetected.

In a report entitled “Does Your Vote Count?,” The Heritage Foundation examines the problem of voter fraud, as well as potential steps and solutions that can be taken by government at all levels in order to ensure the integrity of the electoral process.

The report tackles the persistent myths about voter fraud and voter ID laws and makes clear that election fraud is an issue that must be acknowledged and confronted. There is nothing more central to American democracy than free, fair elections. Without them, the entire system is in jeopardy.