Will This New Labor Department Rule Give Unions an ‘Edge’? 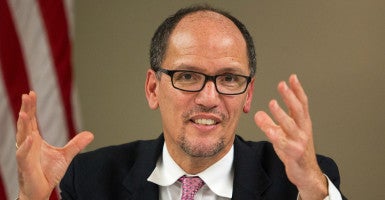 “Workers should know who is behind an anti-union message. It’s a matter of basic fairness,” Secretary of Labor Thomas E. Perez said. (Photo:Department Of Labor/Zuma Press/Newscom)

The Labor Department is imposing regulations requiring more information to be disclosed about agreements between employers and labor relations consultants.

The new “persuader” rule, which takes effect April 25, interprets a section of the Labor-Management Reporting and Disclosure Act of 1959 covering employers and the consultants they hire.

The House Committee on Government Oversight and Reform estimated that the Labor Department’s new rule could cost employers more than $200 million a year.

John Malcolm, director of The Heritage Foundation’s Edwin Meese III Center for Legal and Judicial Studies, wrote about employers’ rights and the attorney-client relationship in a legal memorandum:

Union membership in America is in decline, plunging from 20 percent of workers in 1983 to 11.3 percent (and only 6.6 percent among private sector workers) in 2012. It is no secret that the Obama administration is working overtime to reverse this trend. To this end, the administration is now pushing a radical reinterpretation of an obscure, 50-year-old labor law that would give unions an edge by making it harder for employers to receive legal advice about labor and employment issues.

Some companies hire union-avoidance, or “union-busting,” consultants or lawyers to discourage employees from unionizing. This type of employer-consultant relationship is known as “persuader” activity.

According to the Department of Labor: “A longstanding loophole, however, allows employers to hire consultants to create materials, strategies and policies for organizing campaigns—and even to script managers’ communications with employees—without disclosing anything, as long as the consultant does not directly contact employees.”

The Labor Department says 71 to 87 percent of employers hire consultants to manage counter-organizing campaigns, yet the agency receives few reports on these activities.

For example, employers and consultants already were required to file reports and disclose financial expenditures if a consultant directly talks to employees. The new rule also requires the disclosure of indirect work, such as when a consultant scripts a manager’s speech to employees.

Under the law’s previous interpretation, “advice” included indirect persuasion and was not required to be reported.

“Workers should know who is behind an anti-union message. It’s a matter of basic fairness,” Secretary of Labor Thomas E. Perez said in a formal statement. He added:

This new rule will allow workers to know whether the messages they’re hearing are coming directly from their employer or from a paid, third-party consultant. Full disclosure of persuader agreements gives workers the information they need to make informed choices about how they pursue their rights to organize and bargain collectively. As in all elections, more information means better decisions.

Indirect consultant activities required to be reported are:

“The government imposes many costly regulations, but rarely does it deliberately make it harder for companies to comply with them. Usually the government wants businesses to consult with lawyers to ensure they are following the law,” Heritage’s Sherk said, adding:

The rule will apply to arrangements, agreements, and payments made on or after July 1.

“This rule is about disclosure, and more disclosure here means more peaceful and stable labor-management relations,” Michael Hayes, director of the Office of Labor-Management Standards, said in a formal statement.

“With workers having a better understanding of the true source of persuader communications, worker-supervisor and other workplace relationships are likely to proceed more smoothly no matter what is decided regarding union representation.”

Consultant advice, “recommendations regarding a decision or course of conduct,” and agreements that solely provide legal services are exempt from the rule.

The “rule would effectively provide that if an employer hires outside counsel to get advice on a labor issue, he would have to disclose the relationship in a report, detailing whom he hired, why he hired them, and how much he paid them,” Heritage’s Malcolm wrote. “That report would be available to unions, competitors, and customers.”

The law also would do a disservice to employees “by depriving them of information that would help them make an informed decision about whether to join a union,” Malcolm wrote.