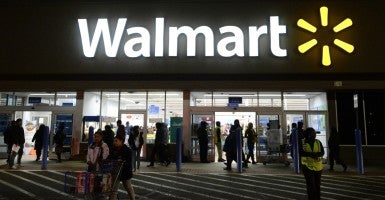 In ruling Puerto Rico’s Wal-Mart tax unconstitutional, the federal judge in San Juan noted that “the Commonwealth should not rely on revenue that it’s not entitled to.” (Photo: Michael Reynolds /Newscom)

A federal judge has ruled that a law enacted by Puerto Rico’s government to charge Wal-Mart more than three times the rate it charges other companies is patently unconstitutional. Wal-Mart is the only company on the island with revenues anywhere close to the $2.75 billion level to which the law applies.

Losing Wal-Mart would be a devastating blow to the struggling Puerto Rican economy—much more so than the alleged $100 million in lost tax revenues. But that’s precisely what the tax would do—drive the retailer off the island.

According to Wal-Mart officials, the tax would have resulted in an effective tax rate of 91.5 percent of net income, with the company paying 114 percent of its island profits in taxes.

Companies that don’t make profits can’t stay in business, and Wal-Mart noted that it would not be able to maintain its Puerto Rico operations for long under the tax.

Fortunately for the people of Puerto Rico who receive jobs, low-priced goods, and a market to sell their products, this unconstitutional tax will not drive Wal-Mart out of Puerto Rico.

In other words, Puerto Rico cannot use Wal-Mart as a cash reserve account. In ruling Puerto Rico’s Wal-Mart tax unconstitutional, the federal judge in San Juan noted that “the Commonwealth should not rely on revenue that it’s not entitled to.”