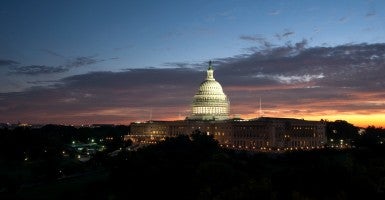 Heritage’s “Blueprint for Balance” presents a truly conservative budget to put America back on the right fiscal path. (Photo: Flickr / US Capitol)

The message is clear: Spending, deficits, and debt are rising at an unsustainable rate that is leading the nation down a path to fiscal disaster.

It is time for Congress to pass a conservative budget.

The House Budget Committee’s 2017 fiscal year budget resolution would reduce federal spending by $6.5 trillion over the next decade to balance the budget by 2026. But first, the House budget adopts the 2017 discretionary spending levels adopted by the Bipartisan Budget Act of 2015.

This increases discretionary spending by $30 billion, from the Budget Control Act level of $1.04 trillion to $1.07 trillion.

Despite adhering to the discretionary spending level requested by President Barack Obama for the 2017 fiscal year, the proposal otherwise stands in stark contrast to the president’s budget proposal. Even so, it falls short in a number of areas from a conservative perspective, and is devoid of key details.

The 2017 House budget funds base discretionary spending at the $1.07 trillion level provided by the Bipartisan Budget Act of 2015—legislation that depended on widespread democratic support to pass.

The House budget could have used this year’s budget as an opportunity to cut wasteful and inappropriate federal spending but instead chose to proceed with the policy of higher spending and circumventing the Budget Control Act caps that marked the Obama-Boehner years.

In contrast, The Heritage proposal provides almost $100 billion in non-defense discretionary cuts in 2017 alone, and cuts several programs to ensure opportunity for all and favoritism for none.

The House budget should go farther in cutting non-defense discretionary programs and reprioritize those savings so that national defense can be funded robustly. The “Blueprint for Balance” ensures that our military is equipped to face mounting challenges across the globe.

Over the next decade, the House budget would spend over $44.1 trillion, $3.2 trillion more than the “Blueprint for Balance.”

For 2017, discretionary spending is $57 billion higher than the budget passed by Congress last May. The sooner lawmakers rein in growing spending, the greater the benefits to the nation and the economy. The Heritage plan would slow spending growth from day one.

The Heritage “Blueprint for Balance” achieves surpluses by 2023 without counting the benefits of macroeconomic feedback or any additional revenues.

The House budget proposal doesn’t reach balance until 2026 and depends on $89 billion in macroeconomic feedback effects for deficit reduction that year to get there.

Though the budget repeals Obamacare, it replaces the tax revenues associated with the law with other taxes. Furthermore, it includes an additional $225 billion in revenues from macroeconomic feedback associated with repealing Obamacare. Without these crutches, this budget would not balance by the end of the decade. Compared to the CBO’s January baseline, the House budget includes $375 billion in higher revenues over the next decade. This is $1.7 trillion higher than the revenue baseline in the “Blueprint for Balance.” The Heritage plan cuts revenues by $1.3 trillion, compared with the CBO January baseline, a real tax cut for the American people and America’s job creators.

The 2017 House budget claims to fully repeal Obamacare; however, it keeps the additional tax revenues associated with the disastrous law. The budget assumes that the decreased revenue from repealing Obamacare will be made up through “deficit-neutral” tax reform.

Without these revenues the House budget would not balance within 10 years. The “Blueprint for Balance” repeals Obamacare in its entirety, providing a tax cut and still balancing the budget in seven years.

While the budget includes support for critical initial reforms to Medicare, Medicaid, the repeal of Obamacare, and a commitment for patient-centered health care reform, it should go farther.

The timeline for converting to Medicare premium-support should be moved up, and there should be an explicit option for Medicaid enrollees to use their Medicaid dollars to purchase private coverage of their choice. The “Blueprint for Balance” would transition Medicare to premium support over a five-year period starting in 2017. For the future of the program and its beneficiaries, Congress can’t afford to delay reforms any longer.

On Social Security, the budget once again falls short, by taking no position on reforms to improve the solvency and affordability of the old age and survivors insurance program, and by supporting only a very minor change to the disability program, by eliminating double-dipping from unemployment and disability benefits.

The Heritage plan offers specifics, including increasing the eligibility age for the Social Security program, and then indexing it for longevity; transitioning the payment to a flat, anti-poverty benefit focused on individuals who need it most; and replacing the current cost-of-living adjustment with the more accurate chained consumer price index.

On the Disability Insurance side, the blueprint would provide an optional private D.I. component; improve work incentives; adopt a needs-based period of disability; eliminate the non-medical vocational grids that allow individuals to receive benefits based on their age, education, or skill; and instruct the Social Security Administration to improve the program’s efficiency and integrity. Implementing these commonsense reforms would save at least $500 billion over the coming decade.

Heritage’s “Blueprint for Balance” presents a truly conservative budget to put America back on the right fiscal path. It balances the budget sooner while cutting taxes and funding defense priorities at a more adequate level to meet operational needs across the globe.

While the House Budget Committee should be commended for putting forth a budget proposal, unlike its Senate counterpart, it is yet another missed opportunity by Congress to change the nation’s fiscal course. Any congressional budget should adhere to the Budget Control Act spending levels (at most) and offer concrete entitlement reform proposals. Unfortunately, the House budget fails to do so.