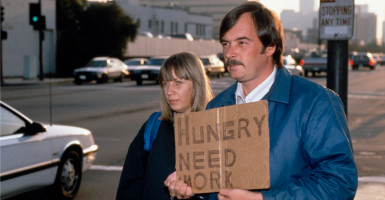 Welfare programs “put people in a position where work is a threat rather than a reward,” the co-author of a new book says. (Photo: Rob Crandall Stock Connection Worldwide/Newscom)

The war on poverty is a war on work, the authors of a new book that criticizes the nation’s welfare system assert.

Phil Harvey, chief sponsor of the DKT Liberty Project, and Lisa Conyers, a policy analyst for the project, conducted a nationwide study of anti-poverty programs for their book, “The Human Cost of Welfare: How the System Hurts the People It’s Supposed to Help.”

“The present system is anti-work. It’s almost a war on work. And that’s insane; at the very, very least, we ought to be helping people get out of the system and into paid employment,” Harvey said Monday as the authors discussed the results of their study at the Cato Institute, a libertarian think tank.

They said their research, illustrated by numerous interviews with welfare recipients, led them to conclude that the current benefits structure traps many enrollees in the very poverty they wish to escape.

Conyers said that despite expectations that many of the nation’s poor prefer being unemployed, the “vast majority of the people that I interviewed would much rather be working” than be on welfare.

She added that welfare programs “put people in a position where work is a threat rather than a reward.”

If income from a job does not cover the value of the food, housing, and health care assistance they receive, many “make a very rational decision, based on the incentives, to not work,” Conyers said.

“The worst thing, it seems to me, that you can do to somebody is to put them in a situation where they’re gonna be in a perpetual cycle of dependency and poverty. That’s cruel, and we shouldn’t do it,” Harvey said.

He argued that the “plethora of benefits—housing, food, etc.—is very patronizing” and public assistance programs should allow people to “make their own decisions about their own lives.”

The DKT Liberty Project, founded by Harvey, works to “reassert citizens’ rights to their own property, to their freedom of movement and of speech, and to their personal privacy.”

Harvey, a libertarian, is chairman of DKT International, a nonprofit birth control advocacy organization. Conyers, who has a master’s degree in management, studies welfare, inequality, and civil liberties as director of policy studies at the DKT Liberty Project.

According to the publisher, the authors propose reforms including “creating wage subsidies for low-income workers, increasing apprenticeships, privatizing welfare, and fixing the Earned Income Tax Credit.”

Conyers said human “happiness requires work and earned success, and … welfare systems get in the way of that.”

“The most surprising thing to me … is the central importance of work to a decent life,” Harvey said, adding:

What people react to and deal with successfully are challenges put in front of them. And it was an eye-opener for me, and I think it comes through in the book, that a satisfying life requires work, even if it’s unpleasant, even if you don’t choose it. It still seems to be fundamental to a decent and happy life.