State Department Loses Another Round in the Clinton Email Fiasco 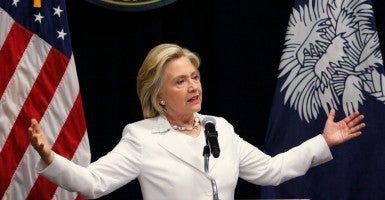 In a second loss in less than two weeks, a federal court has once again ruled against the Obama administration, this time in a Freedom of Information Act (FOIA) tussle with Judicial Watch over the Clinton email fiasco.

Previously, on March 22, the Sixth Circuit Court of Appeals ordered the Justice Department and the IRS to stop their “continuous resistance” and “meritless” objections to producing information and documentation sought in a lawsuit filed by a Tea Party organization in the IRS targeting scandal.

This time, Judge Royce C. Lamberth of the District Court of the District of Columbia issued an order on March 29 giving Judicial Watch the ability to take limited discovery of State Department officials on the adequacy of the Department’s “search for responsive documents” in a FOIA request filed by Judicial Watch seeking former Secretary of State Hillary Clinton’s internal email correspondence. The purpose of the discovery, which, Lamberth admitted, “is exceedingly rare in FOIA cases,” is to help the court determine whether the State Department’s search “reasonably produced all responsive documents.”

Lamberth noted that he has set out the proper standards for limited discovery in a prior FOIA action filed by the Landmark Legal Foundation against the Environmental Protection Agency in which the agency:

… had excluded its Administrator from a search of ‘senior official’ files …, did not search personal e-mail accounts where official government business was being conducted, and ultimately disclosed that the Administrator was sending and receiving e-mails in her dog’s name – which was not subject to the FOIA search.

As Lamberth said (emphasis added), “where there is evidence of government wrong-doing and bad faith, as here, limited discovery is appropriate.”

The State Department claims that it had no obligation to produce Clinton’s State Department emails “because it did not ‘possess’ or ‘control’ them at the time the FOIA request was made.” Lamberth stated, however, that Judicial Watch is “certainly entitled to dispute” this position.

The administration also argued that the fact that it had not actually searched Clinton’s emails at the time Judicial Watch asked for all of her emails “was neither a misrepresentation nor material omission”—a dubious claim, to be sure.

In response to the State Department’s claim that its non-search and subsequent responses to Judicial Watch did not show “a lack of good faith,” Lamberth said “that is what remains to be seen, and the factual record must be developed appropriately in order for this Court to make that determination” (emphasis added).

Lamberth acknowledged that there is a similar ongoing case filed by Judicial Watch pending before Judge Emmet G. Sullivan, who is also in the District of Columbia District Court.

Sullivan has already ruled “that he will authorize limited discovery.” Briefing in that case is ongoing and may effect “what additional proposed discovery, tailored to this case,” Lamberth will allow.

The bottom line is that Judicial Watch is now going to be able to take limited discovery to plum the State Department’s “constantly shifting admissions” over the use of Clinton’s home-brewed computer network by Clinton, her aides, and other senior State Department officials and the extent of their knowledge about that unsecured system—a system that would have been a target-rich environment for lone wolf hackers as well as sophisticated foreign intelligence agencies.