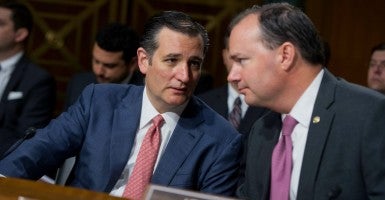 Sens. Ted Cruz, R-Texas, and Mike Lee, R-Utah, both members of the Senate Judiciary Committee, send a letter to the Justice Department demanding documents regarding the enforcement of the FACE Act. (Photo: Newscom/Tom Williams/CQ Roll Call)

Sens. Ted Cruz of Texas and Mike Lee of Utah are accusing the Justice Department of pursuing “frivolous prosecutions” against the pro-life movement and having, according to the senators’ offices, “what appears to be an exceptionally heavy bias” in favor of abortion clinics over houses of worship in a letter sent to U.S. Attorney General Loretta Lynch Tuesday.

The letter concerns the Justice Department’s enforcement of the 1994 Freedom of Access to Clinic Entrances (FACE) Act, a law that prohibits any use or threat of force and physical obstruction outside abortion clinics and places of religious worship. The law, however, does not criminalize peaceful protests or other First Amendment-protected activities outside abortion facilities or places of worship.

In the letter, obtained by The Daily Signal, the Republican senators write:

Cruz and Lee reference the Civil Rights Division’s web page, which cites “more than 15 FACE actions in more than a dozen states” that the Justice Department has filed. The website also notes “ongoing investigations in other states,” along with “several FACE cases and settlement agreements concerning abortion clinic workers or abortion facilities.”

“Interestingly, it does not list a single case concerning the freedom of religious exercise at houses of worship,” Cruz and Lee write.

To further investigate the alleged double standard, Cruz and Lee are demanding that Lynch hand over a broad range of documents pertaining to the FACE Act dating back to January 2009.

For example, the senators requested that the Justice Department “identify the number of matters the [Justice Department] has investigated, looked into, or reviewed concerning potential FACE enforcement” with regard to access to both abortion facilities and houses of worship.

They are also seeking information about whether or not the Justice Department coordinated or closely communicated with abortion facilities or houses of worship in any of its investigations. Another request, for example,  states:

Identify by date, location, and name of organization, every discussion, conference, or meeting (whether by e-mail, text message, phone, video or in person) between the DOJ and any abortion clinic or facility, abortion provider, parent organization or affiliate, concerning FACE enforcement with regard to access to abortion facilities.

According to the FBI, the U.S. experienced a “dramatic escalation in the number of acts of violence and harassment directed towards reproductive health care providers and clinics” in the mid-1980s. Since the passage of the 1994 FACE Act, “the number of violent crimes committed against reproductive health care providers and facilities has dramatically decreased.”

Hans von Spakovsky, a legal expert at The Heritage Foundation who co-authored a book that discussed cases involving the 1994 FACE Act, said he has “not seen any evidence that there are more problems with violence at abortion clinics than at churches.”

“Look at the church burnings that have occurred in the past two decades,” he said. “The idea that one’s not more important than the other, I think, is not correct. And second, a number of the cases [the Justice Department] has filed have been clearly frivolous and meritless cases.”

Last year, The Daily Signal reported on several black churches in the South that have been affected by serious fires.

In their letter, Cruz and Lee specifically ask Lynch to state whether or not the Justice Department investigated, or will investigate, “the blocking of the entrance to, and interference with the religious exercise of members of the Los Angeles, Calif. house of worship shown in this video, particularly beginning at the 5:08 mark.”

According to the Catholic News Agency, the video depicts “violent assaults from opponents protesting the passage of the ballot proposal [Proposition 8] which rescinded a California Supreme Court decision that imposed same-sex marriage on the state.” The protests reportedly occurred at Mormon temples and Catholic churches.

The senators requested that the Justice Department provide the expected information no later than April 11.