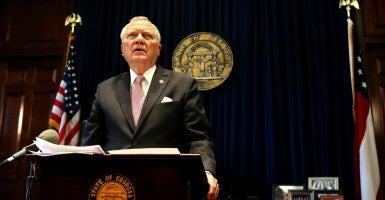 Georgia Governor Nathan Deal. The economic threats made by big businesses to get the government to do their bidding at the expense of the common good are examples of a vicious form of cultural cronyism. (Photo: CreditBob Andres/TNS/Newscom)

Georgia’s Republican Governor Nathan Deal has caved to pressure from big business and special interests and vetoed a very modest religious liberty bill. This shows the lack of courage of many in the political class, and it also highlights the extreme nature of the left and the business community. To these groups, even mild religious liberty protections are unacceptable.

The economic threats made by big businesses to get the government to do their bidding at the expense of the common good are examples of a vicious form of cultural cronyism.

The Georgia religious freedom bill that Deal vetoed would have safeguarded clergy from having to officiate same-sex weddings, prevented faith-based organizations from being forced to hire someone who publicly undermines their mission, and prohibited the state government from discriminating against churches and their affiliated ministries because they believe that marriage is between a man and a woman.

The bill that the Deal vetoed was the result of a series of compromises that significantly watered down the original version. It did not offer protections to bakers, florists, and similar wedding professionals, and it adopted a very narrow definition of faith-based organizations, covering only churches, religious schools, and “integrated auxiliaries”—the same unacceptable definition used by the Obama administration to exclude the Little Sisters of the Poor.

Yet liberals demagogued these very limited protections—and got the governor to veto them. As the Atlanta Journal Constitution reports:

Executives from dozens of big-name companies, including Disney, Apple, Time Warner, Intel and Salesforce, called on the governor to veto the bill. The NFL warned it could risk Atlanta’s bid for the Super Bowl and the NCAA hinted it could influence the state’s ability to host championship games.

That’s right: Big business threatened boycotts and used its outsized economic pressure to force the governor to act against the common good. Do the NFL and the NCAA, Disney and Apple have a zero-tolerance policy for religious freedom bills? Even a bill that didn’t protect the Little Sisters is too much for the left to tolerate.

And the governor swallowed this nonsense hook, line, and sinker. In explaining his veto, Deal argued that the religious liberty bill “doesn’t reflect the character of our state or the character of its people.” Leaving people free to act on their deepest religious convictions apparently isn’t one of those values.

There is a reason why President Bill Clinton signed the Religious Freedom Restoration Act—and why it passed unanimously in the U.S. House of Representatives and with 97 votes in the U.S. Senate. There is a reason why over 20 states have adopted their own state religious freedom restoration acts, and why 11 more have constitutional religious liberty protections that provide a similar level of protection.

Religious Freedom Restoration Acts and other religious freedom protections are needed against our contemporary overactive progressive government. In addition to the First Amendment, both the federal government and the states must act to protect religious freedom—in broad measures like Religious Freedom Restoration Acts and in more specific measures like the First Amendment Defense Act.

Americans need both broad protections and specific protections. So, in addition to the Religious Freedom Restoration Act, Congress has passed a variety of laws that protect pro-life conscience. In Roe v. Wade, the Supreme Court invented a right to an abortion. But after Roe, Congress made clear that government cannot require a pro-life doctor or nurse to perform an abortion—that they, too, have rights that require specific protections from hostile judges and bureaucrats.

Likewise, in the Obergefell decision, the Supreme Court redefined marriage throughout America by mandating that government entities treat same-sex relationships as marriages. The Supreme Court did not say that private schools, charities, businesses, or individuals must abandon their beliefs if they disagree.

We need laws protecting these rights.

Indeed, protecting minority rights after major social change is also a hallmark of American tolerance and pluralism. But Deal seems unwilling to do anything that might protect such people and their rights. And big business and special interests on the left seem intent on doing everything to make sure people are coerced by the government into violating their beliefs.

This is yet another example of cultural cronyism. Businesses in Georgia were always free to embrace gay marriage—to bake wedding cakes for gay marriages and make floral arrangements for same-sex nuptials—and many do. But now activists want the government to force everyone in Georgia to do it. And they’ve attacked religious freedom for everyone in the process.

America is in a time of transition. Courts have redefined marriage, and beliefs about human sexuality are changing. During this time, it is critical to protect the right to disagree and the civil liberties of those who speak and act in accord with what Americans had always believed about marriage—that it is the union of husband and wife.

Good public policy is needed at the local, state, and federal levels to protect cherished American values. These policies would help achieve civil peace amid disagreement, maintain pluralism, and protect the rights of all Americans, regardless of what faith they may practice.