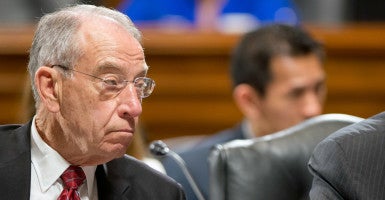 Sen. Chuck Grassley is a sponsor of the "Separation of Powers Restoration Act of 2016," which would give more authority to courts, rather than administrative agencies, in interpreting statutes and regulations. (Photo: Ron Sachs/dpa/picture-alliance/Newscom)

With much attention on how the Supreme Court could overturn major cases dealing with religion, campaign finance, and the Second Amendment if a liberal were to replace Justice Antonin Scalia, conservatives hoping for one of their own to assume the bench are quietly angling for the court to revisit a decision dealing with executive power.

In 1984, the Supreme Court set the so-called Chevron doctrine, which created the precedent that courts defer to executive branch agencies in deciding how to interpret ambiguous statutes that the executive branch administers.

Earlier this month, leading Republican lawmakers from both chambers of Congress introduced legislation that would seek to undermine the Chevron doctrine by clarifying the Administrative Procedures Act to say that courts, not agencies, are to interpret all questions of law, including both statutes and regulations. As a result of the Supreme Court’s 1984 ruling in Chevron U.S.A. Inc. v. Natural Resources Defense Council Inc, an agency such as the Department of Health and Human Services or the Environmental Protection Agency is able to implement policy how it wants to as long as the statute is “ambiguous” and the agency’s reading is “reasonable.”

In other words, a court won’t overturn the agency’s interpretation unless it is unreasonable, even if it is unclear.

Sponsors of the identical Senate and House bills, dubbed the “Separation of Powers Restoration Act,” include Sens. Chuck Grassley of Iowa, Orrin Hatch of Utah, and Mike Lee of Utah and Reps. Bob Goodlatte of Virginia, Tom Marino of Pennsylvania, and John Ratcliffe of Texas.

Republicans argue that the Obama administration has relied on this precedent aggressively, citing it in legal briefs and oral arguments in an attempt to usher through major initiatives like the Affordable Care Act.

“Chevron allows and even incentivizes agencies to stretch the law they administer beyond congressional intent to increase their own authority, and it blurs the line of separation between the branches,” said Grassley, the chair of the Senate Judiciary Committee, during a recent appearance at The Heritage Foundation, where he and other lawmakers introduced their legislation. “This has weakened our system of checks and balances.”

Goodlatte, the chairman of the House Judiciary Committee, added, “Correcting the damage done by Chevron will help to stem the rising tide of the administrative state and stop the encroachment of the executive branch on our fundamental liberties.”

Chevron has enjoyed bipartisan support in the past from those who believe that it limits the power of activist judges and gives more authority to experts in their fields working for administrative agencies.

But law experts say the doctrine has become a political tool used by both parties to further their agendas.

“In some ways, Chevron tends to unite both sides of the aisle,” said Linda Jellum, a professor at Mercer University who specializes in administrative law.

“I know conservatives think Obama is pushing the boundaries more, but I don’t see that. I see all presidents push those boundaries, and when we disagree with the administrative agencies, we blame Chevron.”

Jellum believes that Chevron creates uncertainty because an agency’s interpretation of a statute can change—and alter the impact of the law—depending on the political party that controls the agency.

“Chevron was a great idea,” Jellum said. “But it’s not working. Indeed, Chevron has become incredibly political. Although Chevron appears to provide a neutral message for judges to decide these questions, it turns out to be used in very partisan matter.”

In a Supreme Court case last year when the justices ruled that Obamacare can provide tax subsidies nationwide to help people buy health insurance, the White House leaned on the Chevron doctrine to make its case.

The administration argued that a section of the law that says subsidies are available to people “enrolled in through an Exchange established by the State” is ambiguous, and under the Chevron deference, the Internal Revenue Service should be able to interpret that language how it sees fit.

Ultimately, the court ruled that the Chevron doctrine did not apply in the case, citing “extraordinary” circumstances.

“In extraordinary cases, however, there may be reason to hesitate before concluding that Congress has intended such an implicit delegation,” Chief Justice John Roberts wrote. “This is one of those cases. The tax credits are among the Act’s key reforms, involving billions of dollars in spending each year and affecting the price of health insurance for millions of people.”

Jellum believes that Roberts chose not to apply Chevron because he worried that an IRS run by a future administration could interpret the “established by the State” phrase in a different way and not make the subsidies available to people in every state, leaving the health care market in flux.

“Roberts had some concern the agency would change the interpretation of a major policy simply with the change of a president,” Jellum said. “There is a benefit to consistency by agencies even when the personnel are changing. If you don’t change the law and change the agency secretary and he or she says we will interpret this statute in a conservative or liberal way, then that lacks consistency for the American people.”

Alan Morrison, a professor and administrative law expert at George Washington University, contends that the inconsistency that Chevron creates is preferable to the courts playing too heavy-handed of a role in the lawmaking process.

“This [repealing the Chevron doctrine] will stimulate more litigation over administration agency decisions,” Morrison said. “Agencies don’t sit down and make laws. They make decisions and rely on facts and scientific studies.”

“In the face of inevitable uncertainty, because human beings write laws, should we assume all those disputes go to court, or that a significant number should be resolved by politically accountable agency people?” Morrison added. “If the EPA, for example, interprets a law in an expansive way, and people don’t like it, people can vote the EPA out. You can’t get rid of judges. They are there for life.”

Although it’s unclear what the impact of the “Separation of Powers Restoration Act” would be if it became law, the Supreme Court could also revisit Chevron on its own.

If a conservative replaces Scalia as the Supreme Court’s ninth justice, Jellum thinks it’s possible the court could choose to take another look at Chevron.

With no easy answers, Jellum suggests that the court may be wise to go back to the old standard of deference established by the Supreme Court’s Skidmore v. Swift & Co. decision in 1944.

That ruling stated that an agency’s ability to interpret the rules it creates is determined by how persuasive the agency is in making the case for why the rule is necessary.

“Right now, the Chevron deference is given to agencies simply because of who they are,” Jellum said. “It’s like if your parent tells you what to do, you do it because it’s your parent, and you have no choice. Chevron fails in part because the idea is simply that since the agency administers the statute, we therefore should defer to the agency. Under Skidmore, the agency instead needs to earn that deference. Skidmore is not perfect, either. But it’s a better approach than what Chevron turned out to be.”