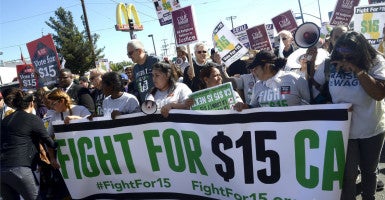 California Gov. Jerry Brown announced a plan today to raise the minimum wage to $15 an hour by 2022. Labor experts warn the wage hike could lead to higher prices and more automation for consumers. (Photo: Mike Nelson/EPA/Newscom)

California lawmakers and labor leaders are cheering a new deal that, if passed, raises the state’s minimum wage to $15 an hour, making the Golden State the first in the country to do so.

But labor experts are already warning that such a wage hike could lead to higher prices for consumers, more automation, and a drop in employment.

According to media reports, lawmakers and labor unions reached a deal this weekend raising the statewide minimum wage to $15 an hour by 2022. Gov. Jerry Brown, a Democrat, formally announced the proposal Monday.

“California is proving once again that it can get things done and help people get ahead,” Brown said. “This plan raises the minimum wage in a careful and responsible way and provides some flexibility if economic and budgetary conditions change.”

The deal would raise the minimum wage to $10.50 an hour next year, with increases of $1 per hour taking place annually until the minimum wage hits $15 an hour. Businesses with fewer than 25 employees have until 2023 to comply.

According to the Los Angeles Times, state lawmakers could vote on the proposal as early as this week.

Though the new proposal has labor unions and Democratic state lawmakers cheering, labor experts are already forecasting increased prices for consumers and more transitions to automation for business owners.

James Sherk, a research fellow in labor economics at The Heritage Foundation, said a $15-an-hour minimum wage is unprecedented for any state in the U.S., and the long-term impacts are therefore unknown.

Sherk said such a wage hike is likely to lead to a reduction in employment, specifically for manufacturing companies that sell products across state lines.

Those businesses, he told The Daily Signal, don’t have the opportunity to raise prices, and the industry employs 1.6 million Californians, 37 percent of which make less than $15 an hour.

“A lot of those jobs will move to other states and countries,” Sherk said.

Sherk also warned that in the fast food and hospitality industries, consumers can expect to see prices increase to compensate for increased labor costs.

“For industries like fast food or hotels or anything like that, the only place they can get money is by raising their prices,” he said. “This will cause consumers to purchase less goods and services. It’ll hurt consumers in their wallets.”

Some cities in California like San Francisco and Los Angeles have already enacted minimum wage increases above the statewide $10 an hour. Though many advocates argue that such wage hikes are intended to help workers struggling to make ends meet, particularly in cities with high costs of living, Marc Joffe, a policy analyst at the California Policy Center, fears that a wage hike could hurt the very people it’s intended to help.

According to an analysis of how a $15-an-hour minimum wage would impact the state, Joffe found that such a wage hike would negatively affect areas of the state that have higher unemployment rates and weaker economies, such as the Central Valley.

“A place like San Francisco can probably absorb [a wage increase], but the problem is that California is a really very diverse state in terms of income levels, levels of prosperity, productivity, and so forth,” Joffe told The Daily Signal. “When you put a one-size-fits-all solution like that in, you’re really hurting less affluent counties.”

In the wake of the most recent minimum wage hike from $9 an hour to $10 an hour, Joffe said that areas are already turning to automation as a way to cut down on labor costs. Self-checkouts are replacing cashiers in supermarkets, he said, and customers place restaurant orders on kiosks in San Francisco restaurants.

“Even in downtown San Francisco, which could sustain higher prices, they’re doing things to substitute for workers,” he said. “When you take these differences in cost of living and economic vitality, [raising the minimum wage] becomes a real problem in areas that are less affluent.”

Sherk, too, warned that more and more places could turn to automation to cut down on labor costs and employment substitution, which occurs when employers opt to hire more skilled workers.

“Companies will be choosier,” he said. “What we’ve seen in other cases is, you have more disadvantaged workers losing out. Those with more skills begin to get disproportionately favored and hired.”

Though Brown announced Monday the deal with state lawmakers and labor leaders, he previously said he was hesitant to raise the minimum wage beyond $10 an hour.

“Raise the minimum wage too much and you put a lot of poor people out of work,” he told reporters in January. “There won’t be a lot of jobs. It’s a matter of balance.”

According to Brown’s budget summary for 2016, raising the minimum wage to $15 an hour would cost the state $4 billion annually by 2021. Additionally, the state warned that not only would such a wage hike return the state budget to annual deficits, but it would also “exacerbate” a recession and add to job losses.

Similarly, the California Department of Finance warned against raising the minimum wage to beyond $10 an hour in a legislative analysis conducted in March. According to its analysis, which looked at a bill raising the minimum wage to $13 an hour in July 2017, the Department of Finance warned that such a wage hike would cost the state more than $4.7 billion over a three-year span.

The agency also stressed that the increased minimum wage would have a negative impact on California’s economy and lead to slower employment growth.

Brown said Monday the wage hike will cost the state $20 million in 2016.

“Small businesses in California are still struggling to cope with the 25 percent minimum wage hike over just the past two years,” Tom Scott, director of the California National Federation of Independent Business, said in a statement opposing the proposal. “Proposing a 50-percent increase on top of that is reckless and ignores serious negative consequences including job loss and increased costs to job creators, senior citizens, and nonprofits.”

The minimum wage proposal unveiled Monday comes days after an initiative backed by the Service Employees International Union-United Healthcare Workers West qualified for the state’s Nov. 8 ballot. The proposal would have raised the minimum wage to $15 an hour by 2021.

A second proposal, also backed by the SEIU, is still being circulated for signatures, according to The Los Angeles Times. In addition to raising the minimum wage to $15 an hour, the measure also requires businesses to provide employees three new sick days annually.