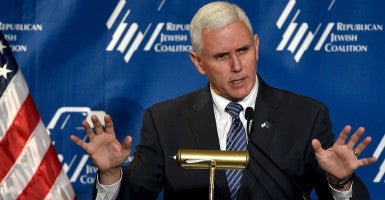 Carissa Carroll, a mother of a toddler with Down syndrome, told The Daily Signal she supports legislation in Indiana, signed Thursday by Republican Gov. Mike Pence, that put a statewide ban on aborting babies due to genetic causes like Down syndrome.

“Our son has changed our life for the better,” Caroll said. “Although we were shocked by the diagnosis of Down syndrome, we really are so thankful for who Jack is and how he has made us see our lives in a much more beautiful way.”

Indiana’s new law prevents a person from performing an abortion if he knows the pregnant woman wishes to abort the unborn baby because of a diagnosis of Down syndrome or any other disability. It also prevents abortions due to the race, color, national origin, ancestry, or sex of the child.

“It is estimated that more than two-thirds of pregnancies that receive a prenatal diagnosis of Down syndrome are terminated,” state Rep. Peggy Mayfield, R-Martinsville, a co-author of the legislation, said in a statement to The Daily Signal.

Down syndrome, a genetic disorder that results in an extra chromosome, is the most common chromosomal disorder.

“Some of my most precious moments as governor have been with families of children with disabilities, especially those raising children with Down syndrome,” Pence said in a statement Thursday.

I believe that a society can be judged by how it deals with its most vulnerable – the aged, the infirm, the disabled and the unborn.

I sign this legislation with a prayer that God would continue to bless these precious children, mothers and families https://t.co/JPyCrsdqcF

“It’s good to see society recognize the worth of these lives,” he added, “and the need to stop discrimination against those with disabilities.”

State Sen. Liz Brown, R-Fort Wayne, a sponsor of the bill, told The Daily Signal that the law showed how “pro-life advocates … are resolute that all human beings have value.”

“At the same time,” she said, “we have continued to improve the access to services when these individuals may have some difficulty when they are born.”

The new law also “prohibits an individual from acquiring, receiving, selling, or transferring fetal tissue” and also requires a miscarried or aborted baby to be buried or cremated by the facility in possession of the remains.

Indiana is now the second state, behind North Dakota, to have a law in place preventing abortion due to cases of Down syndrome and other genetic causes. According to the Centers for Disease Control and Prevention, about one in every 700 babies is born with Down syndrome.

The law also requires a pregnant woman to get an ultrasound and listen to the baby’s heartbeat at least 18 hours before an abortion is performed.

“It’s just more hoops to jump through, more appointments, all of which add up for women who have to work jobs or have less resources available to them,” Patti Stauffer, vice president of public policy for Planned Parenthood of Indiana and Kentucky, told The Washington Post. “While [lawmakers] don’t come out directly and ban abortion, [that is] the cumulative effect of all these restrictions for some women.”

Those in opposition to the legislation say the bill does not save lives and creates obstacles for women and could force women to give birth to babies who might not survive long.

Carissa and her husband Chris Carroll, who live in Minnesota, experienced an unexpected Down syndrome diagnosis when their second child, Jack, now 3, was born.

Speaking about the case of someone whose child didn’t have Down syndrome but was diagnosed with a medical condition later, Carissa mused, “Why is it OK for a baby in the mother’s womb to be terminated, but at the age of three diagnosed with something and they have to then, in a sense, accept their new path? Why is the mother’s womb, in a sense, a harmful place for a baby with Down syndrome?”

Madeline Stuart, a 19-year-old Australian model with Down syndrome, and her mother Rosanne Stuart told The Daily Signal abortion is “a personal choice.” Rosanne added:

“But as the mother of an amazing daughter with Down syndrome who has taught me more about love and what really makes the world go round, I think the world would be a very bland and cold place if we ever eradicated [Down syndrome] and other disabilities.”

“The numbers are appalling for those diagnosed in the womb with Down syndrome—most studies indicate a majority are aborted,” the Charlotte Lozier Institute’s Prentice says.

“The old stereotypes of those with Down syndrome need to be dispelled—these are generally happy, fulfilled people who contribute much to our lives and to society,” Prentice said.

Jack and his brother Luke, who is two years older than Jack, are “just like typical brothers.”

The brothers wrestle and take each other’s toys, Carissa says.

“Our lives,” she said, “don’t look much different than those that don’t have children with Down syndrome.”