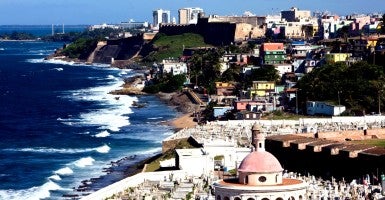 In addition to Puerto Rico’s $72 billion in public debt, the U.S. territory owes another $44 billion in unfunded public employee pension benefits. This mountain of pension debt could cause certain bondholders to lose some or all of their investments.

Who will lose what is yet to be determined, but Puerto Rico’s pension debts are almost certainly much higher than $44 billion. That’s because Puerto Rico, along with all other U.S. states and localities, uses its own assumptions to evaluate unfunded pension liabilities.

This means investors have to compare apples to oranges when considering governments’ abilities to repay investors. Two cities could report the exact same unfunded pension liability, and yet one could be twice as high as the other if both used the same set of assumptions.

Private companies cannot manipulate their unfunded liabilities by changing their assumptions. With the exception of union-run plans, private companies must follow uniform and considerably more conservative standards when reporting their pension liabilities. These universal standards allow for apples-to-apples comparisons across companies and plans.

When it entered bankruptcy, Detroit reported some $650 million in unfunded pensions. Using a more conservative but still optimistic assumption of a 7-percent rate of return, Detroit’s unfunded pension liabilities soared more than fivefold to $3.5 billion. Because Detroit pensioners experienced only minimal reductions, this nearly $3 billion difference was borne almost entirely by Detroit bondholders. Had those bondholders known Detroit’s true pension liabilities, they would have either not purchased those bonds or required a much higher price for them.

In Puerto Rico, some creditors are prioritized over pensioners, but many others are not. And the administration and others in Congress want to protect pensioners at the expense of all other bondholders—even if it means violating constitutional protections.

Governments Should Follow Same Rules They Require of Private Companies

In addition to disclosing required financial statements, which the Puerto Rican government consistently fails to do, Puerto Rico should be required to provide a more accurate evaluation of its unfunded pension obligations, using the accounting methods and assumptions required by private companies.

Moreover, all states and localities that want to maintain the federal tax exemption for interest on their bonds should be required to include their unfunded pension liabilities according to uniform standards established for public employee pensions.