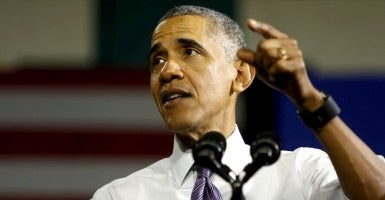 Centers for Medicare and Medicaid Services data show that total per capita health insurance spending will rise from $7,786 in 2016 to $11,681 in 2024. (Photo: Jonathan Ernst/Reuters/Newscom)

Team Obama projected that their version of health care reform—replete with the bells and whistles of “investments” in health information technology, health care delivery and payment reforms—would translate into big cost reductions for individuals, families and businesses. In his iconic health care “talking points”, the president said that the “typical” family would see a yearly $2500 savings in their health costs.

Those family cost savings, of course, have not materialized.

In year six, even with lower than anticipated enrollment in the health insurance exchanges and the refusal of 21 states to participate in the law’s Medicaid expansion, the health care cost curve is still on an upwardly mobile trajectory.

It is fueled by sharp increases in both public and private health care spending.

Centers for Medicare and Medicaid Services data show that total per capita health insurance spending will rise from $7,786 in 2016 to $11,681 in 2024. Looking at the future of employer-based health insurance costs, the Congressional Budget Office (CBO) projects that job-based premiums are poised to increase by almost 60 percent between now and 2025.

“Given how the ACA’s advocates touted the law as ‘bending the cost curve down and reducing the deficit’ while occasionally in the same sentence crediting it with expanding coverage to ‘more than 94 percent of Americans’, many Americans could be forgiven for not understanding that those two goals were in conflict.”

Obamacare cannot deliver the impossible (even if it were good public policy­— and it isn’t).

The True Costs of Obamacare

Courtesy of the Affordable Care Act, public spending is outpacing private spending. For 2015, the Congressional Budget Office reports that the federal government spent a total of $936 billion on health programs (for example, Medicaid, Medicare, and the Affordable Care Act), a 13 percent increase over the 2014 level.

For 2015, the Congressional Budget Office reports that Medicare spending increased almost 7 percent, the fastest rate of growth since 2007; and, over the period 2013 to 2015. They also report that Medicaid spending alone jumped by 32 percent.

Medicaid is the fastest growing component of America’s poorly performing welfare state. Many Affordable Care Act advocates applaud the government’s increasing role in American health care as an indisputably good thing, but that does not bend the notorious “cost curve” downward. Nor does it guarantee value for the dollars expended, even if, as the president says, the Affordable Care Act has incorporated “ every single good idea” to do so.

But in 2010, the Congressional Budget Office declared that most of these initiatives would have little if any effect on health spending. In 2012 they completed a more detailed evaluation found limited success, but most of the “value-based” initiatives to be largely unimpressive as a source of savings.

In their operations to date, only about half of the Medicare accountable care organizations (ACOs) have yielded savings. The best that can be said, thus far, is that the jury is still out on the Affordable Care Act delivery reforms.

From roughly 2003 through 2013 there was indeed a general decline in health spending. But, obviously, Obamacare didn’t deliver that; the economic slowdown mostly did.

“… very few of the ACA’s provisions had been implemented in any substantial way, making it difficult to attribute much of the slowdown to the effects of specific provisions of that law.”

Obamacare Is Not the Solution

Make no mistake. With the Affordable Care Act, the president and his allies in Congress have, in fact, armed themselves with some big, sharp cutting knives. The law calls for sustained payment cuts to the popular Medicare Advantage program. It also has scheduled some big Medicare payment reductions over the next ten years for hospitals, nursing homes, home health agencies and even hospice care programs.

The Affordable Care Act’s payment reductions and price controls are not the right solution to the health care cost problem.

Congress and the next administration are going to have to focus laser-like on the continuing problem of health care costs. They should take decisive steps to level the playing field, harness the benefits of real market competition among plans and providers to control costs. They should also unleash genuine consumer choice to secure real value for health care dollars. America is not going to control costs and secure better value and higher quality care through bigger bureaucracy and central planning. Next year, lawmakers must produce a much better legislative product.