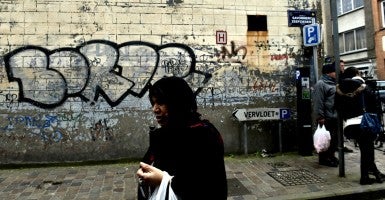 A woman walks near the house where Salah Abdeslam, the most-wanted fugitive from November's Paris attacks, was arrested after a shootout with police in the Brussels district of Molenbeek. (Photo: Eric Vidal/Reuters/Newscom)

Belgians and all Europeans are looking around themselves today with renewed apprehension, having been reminded once more by the attacks in Brussels about their vulnerability to terrorism that arises from within their midst. They’ve allowed parallel societies to emerge, and now they fear that the problem can only grow.

It was only fitting, for example, that when police arrested the suspected terrorist Salah Abdeslam in the gritty Molenbeek neighborhood of Brussels late last week, across town, European Union leaders were meeting at the plush EU Commission headquarters to discuss the immigration crisis that bedevils Europe.

The Molenbeek neighborhood represents the division and separation that exist in European society.

Fitting because the Molenbeek neighborhood represents the division and separation that exist in European society, and why there is a fear that migrants arriving in Europe in their hundreds of thousands could find in such places networks ready to radicalize those migrants.

The police who finally arrested Abdeslam—wanted for his alleged participation in the Nov. 13, 2015, terrorist attack that left 130 dead in Paris, after a four-month manhunt and gunfight that left him wounded—seemed at times to be fighting Molenbeek, some of whose residents threw missiles at them. After the arrest, Belgium’s interior minister remarked that he was surprised by how much help Abdeslam had received.

Though it’s too early to tell about the attack at Brussels on Tuesday, March 22, the Molenbeek neighborhood incubated the Paris attack. Ringleader Abdelhamid Abaaoud came from there. Several of the other terrorists, including Salah Abdeslam, had ties to the neighborhood, where Muslims make up more than half of the population and youth unemployment is high.

Molenbeek is hardly alone. Ca n’Anglada in Barcelona has also been identified as the origin of several ISIS fighters. Amin Iharchain, a 31-year-old Moroccan resident, told the newspaper El País:

[R]adicalism has overwhelmed this quarter; neither the local Iman nor any of the 29 Muslim associations that registered will say anything. It’s not just here in Ca n’Anglada, but also in L’Hospitalet de Llobregat, Badalona[.] … It is unemployment, poverty, the feeling of inferiority, all tied to a radical message.”

In Germany there is Marxloh and Neukölln; in France, Seine-Saint-Denis and Clichy-sous-Bois. In Britain, the Islamic population is also clustered in some cities.

Many of the refugees now coming into Europe as a result of the chaos in Mesopotamia will settle in neighborhoods such as these, where they can be radicalized. Already they contain radical networks that can be used by ISIS or other sponsors of terrorism.

Earlier last week, before the arrest, Heritage Foundation Vice President James Jay Carafano wrote presciently, “ISIS organizers are simply plugging into standing extremist communities. These networks are popping up all over the world … by far the most concerning networks right now are in Western Europe.”

European politicians cannot escape blame for allowing divisions to fester, which found physical manifestations in these urban quarters and the networks that ensued. Germany’s handling of Turkish “guest workers” is instructive.

As the German magazine Der Spiegel put it in 2010 about the effort to bring in workers in the 1960s:

At the time, no one in Germany cared much about the fact that many of the new arrivals could hardly read or write, making it difficult for them to participate in German society. The guest workers were expected to live together in newly built dormitories near the factories where they worked, and return to their native countries after working for a few years.

Except that few of the gastarbeiters ever went back to Anatolia—nor did they stay in the dormitories. Eventually, these men began to bring in their wives and have families, and a subtle transition began between being a guest worker and being an immigrant.

Because they needed more space, the Turks began moving out of the dormitories and into cheap apartments in neighborhoods near the factories, which the Germans gradually vacated. This led to the rise of immigrant neighborhoods like Marxloh in the western city of Duisburg and Neukölln in Berlin, which are now seen as the strongholds of so-called parallel societies.

Basically, German politicians didn’t realize that the Turkish immigrants should be assimilated into German culture. In so doing, they contributed to the creation of these parallel societies in their midst.

Just as in America, some European thinkers and opinion makers are beginning to raise their voices about the connection between the lack of assimilation and radicalization. One particularly brave politician has been Prime Minister David Cameron.

A year after becoming prime minister, he went to the Munich Security Conference and said terrorism was not really caused by Western foreign policy, poverty in the Middle East, or the Palestinian-Israeli conflict. “Even if we sorted out all these problems,” he said, “there would still be terrorism.”

The reason many young Muslims in the West are drawn to Islamist extremism, he said, “comes down to a question of identity. These young men find it hard to identify with Britain because we have allowed the weakening of our collective identity.”

Writing in the Times of London earlier this year, Cameron added this:

All too often, because of what I would call “passive tolerance”, people subscribe to the flawed idea of separate development[.] … It is time to change our approach. We will never truly build one nation unless we are more assertive about our liberal values, more clear about the expectations we place on those who come to live here and build our country together, and more creative and generous in the work we do to break down barriers.

It is too late for men like Abdeslam. But for millions of immigrants and their children in Europe now, it isn’t too late—if only the folks meeting at the EU Commission headquarters wake up to the need for assimilation.