Why Obamacare Premiums Are Climbing All Over US 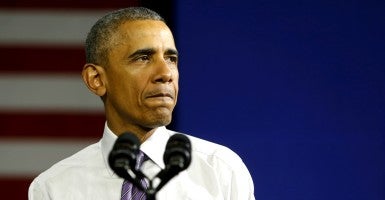 For example, plans increased rates by 25.1 percent in Kentucky, 14 percent in Ohio, and nearly 11 percent in Michigan. (Photo: Jonathan Ernst/Reuters/Newscom)

On the third year of the Affordable Care Act exchanges, it is becoming more apparent that the promises of cost-saving and premium reduction may be reserved only for people who are able to capture the most subsidies.

Exchange premiums are climbing all over the country. For example, plans increased rates by 25.1 percent in Kentucky, 14 percent in Ohio, and nearly 11 percent in Michigan. In Idaho, the largest insurer, Blue Cross of Idaho, had a rate increase of 23 percent. Some plans, as in the case of New Mexico, had to pull from the exchanges due to high costs. For the country as a whole, through modeling at The Heritage Foundation, we estimate that a premium increase of roughly 15 percent is in order for 2016.

The main reason many insurers are raising premiums this year is because they are experiencing higher than expected costs.

This update implies that the people currently signed up in the plans are less healthy than what was anticipated by the company when calculating what to charge for premiums last year.

This also shows, as pointed out by senior research fellow at the Mercatus Center Brian Blase, that the mandate may not be having the expected effect on enrollment. Additionally, some plans are utilizing a narrow network model, which is less flexible on doctors and providers, to keep premium increases low.

For 2014, in the state of Tennessee, premiums for a 27-year-old on the exchanges cost 70 percent more than what that person would have paid previously. In 2015, premiums would increase another 18 percent for that individual, in a year that was billed as one including “modest” increases.

For a 50-year-old, premiums increased by 31.6 percent in 2014 and 9.8 percent in 2015. In 2016, the premium increases for younger adults is similarly larger than the rest of the population. While many will point to the subsidies as a reason premiums are not rising quickly for many individuals in the exchanges, it is important to note the effect higher costs have on discouraging enrollment from people that have higher incomes.

These people won’t get as much of a subsidy, and subsequently, shopping in the exchanges isn’t nearly as appealing. The fact remains that these subsidies still have to be funded, and at an increasing rate.

This behavior in the markets is not some glitch or temporary effect. Heavily regulating insurance plans in these markets has led to large increases in premiums. There are several examples, but three factors contribute greatly to increasing premiums.

The Affordable Care Act restricts age-specific pricing to a ratio of 3 to 1. This means that Obamacare doesn’t allow prices to vary between someone who is 18 and someone who is 64 by more than three times the medical cost. The natural variation in medical costs across the ages is, however, at least five times. This restricts the amount a person can be charged directly for his expected costs.

This leads to increased costs by making many plans pay for benefits that individuals do not need or utilize. Finally, the Affordable Care Act’s minimum actuarial requirement establishes a floor for what plans must pay toward the cost of covered services. The law standardizes this into metal tiers. Plans under 60 percent no longer exist.

The Affordable Care Act was sold as something that would lower the cost of health care for millions of Americans. The only thing another year of premium increases, now once again accelerating, proves is that the promise becomes harder and harder to believe.