In Their Own Words: Down Syndrome Across the World 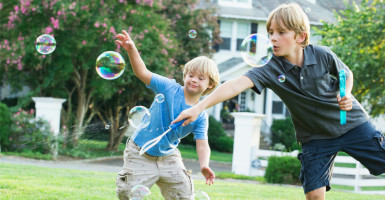 One of every 700 to 900 babies worldwide is born with Down syndrome. (Photo: Ariel Skelley/ Blend Images/Newscom)

The everyday connections of children born with Down syndrome are highlighted in new video interviews about the lives, friendships, and aspirations of kids across the world.

“Which three words describe you best?” an interviewer asks two Italian boys, Riccardo and Gianmarco, in one clip.

“Wash my teeth,” Riccardo says with a grin.

Since 2006, March 21 has been celebrated as World Down Syndrome Day in countries around the world. The date, 3/21, reflects the triplication of the 21st chromosome that causes the genetic disorder.

The extra chromosome causes delays in mental and physical development. Those with Down syndrome typically have trouble with learning, decision making, concentration, and memory. In developed nations, however, some go on to graduate high school and find paying jobs. Most can live to 50 or 60 with the disorder.

The United Kingdom-based Down Syndrome International released the video clips as part of its “My Friends, My Community” initiative, which promotes the inclusion of Down syndrome children around the world. Each clip features an interview with one of these children and a friend.

“The reality for many is that prevailing negative attitudes result in low expectations, discrimination and exclusion, creating communities where children and adults with Down syndrome cannot integrate successfully with their peers,” Down Syndrome International said in a formal statement.

Groups and organizations from 33 countries arranged the interviews. The groups sent the videos to Down Syndrome International for editing and release.

In the clip from Italy,  Riccardo and Gianmarco are interviewed together.

“Which three words describe your friend?” the interviewer asks the boys.

“Beautiful, nice, and a little bit talkative,” Riccardo, the one with Down syndrome, says.

Another clip features Kim and Magali, friends from Switzerland.

Kim, who has Down syndrome, says she lives at home with “Mom, Dad … and Nala,” and wants to be a teacher when she grows up.

Magali says she lives with her cats, a sister, her parents, two mice—sometimes even a third one—two bunnies, and two guinea pigs. She says she wants to grow up to be a horse trainer and riding instructor.

The girls agree on one thing—they will still continue to see each other even when they get older.

Colorful posters and a shelf full of stuffed animals surround Chiara and Nadja as they talk about school, their hopes for the future, and their lives in Germany.

Boys are also a topic.

“I don’t like boys,” Chiara, who has Down syndrome, says. “The boys tease the teacher and the teacher scolds them.”

“We have a ‘clique’—which has no name—and during the breaks we gossip about girl’s stuff and Chiara is with us there,” Nadja says. “And there is a boy who chats with us. We have to send him off because he annoys us.”

The interviewer asks what the girls like to do with each other.

Chiara says the two watch TV together and play with their cell phones.

All children benefit when children with Down syndrome have an opportunity to participate in an environment of “friendship, acceptance, and respect for everyone,”  the statement from Down Syndrome International says, adding:

These environments prepare all today’s children for life as tomorrow’s adults, enabling adults with Down syndrome to live, work and participate, with confidence and individual autonomy, fully included in society alongside their friends and peers.