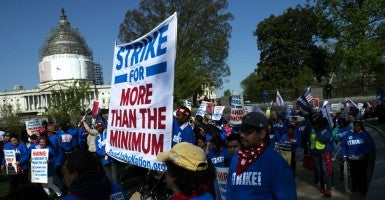 A recent poll of D.C. business owners found more than half of them plan to eliminate jobs if the minimum wage rises to $15. In fact they may already be happening. (Photo: Kevin Dietsch/UPI/Newscom)

Anil Niraula is a member of the Young Leaders Program at The Heritage Foundation.

Last summer, the District of Columbia increased its minimum wage to $10.50 an hour, which is currently the highest for any U.S. state or territory. This July, the District’s minimum wage will rise again to $11.50 an hour. Then, on Nov. 8, 2016 D.C. voters may consider an initiative to increase the minimum wage to $15 an hour by 2020, resulting in even more job losses, while business owners and consumers face higher prices.

Why do policymakers think such a high minimum wage may be appropriate? A recent article by the Brookings Institution points out:

The push for $15 per hour in D.C. and elsewhere hasn’t been based on complex statistical analysis. It started with a series of strikes by fast-food workers in 2012, who rallied around $15 as an audacious goal, but one that was round and easy to remember.

While raising the minimum wage sounds compassionate, it will probably hurt the very workers its advocates want to help.

Economists at the University of California-San Diego examined how the 2007-2009 federal minimum wage hike affected low-income workers. They found that it reduced their total earnings by $150 a month. Employers responded to the higher pay by hiring fewer workers, cutting hours, and replacing less skilled workers with more skilled applicants. On net, affected workers lost money.

A recent poll of D.C. business owners found more than half of them plan to eliminate jobs if the minimum wage rises to $15.

Such job losses will probably happen in D.C. as well. A recent poll of D.C. business owners found more than half of them plan to eliminate jobs if the minimum wage rises to $15. In fact, this may already be happening.

These changes will also hurt low- and middle-income consumers. When business costs rise, firms must raise prices. In order to afford $15 an hour, the average fast food restaurant would have to reduce employee hours by a third while increasing prices 38 percent.

Advocates want minimum wage increases to help low-income workers. Instead, they will make it more difficult for workers to find work while raising their cost of living.