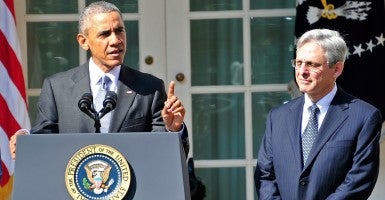 President Barack Obama’s nomination of Judge Merrick Garland to the Supreme Court has some conservatives up in arms over his past opposition to the Second Amendment.

If confirmed by the Senate, Garland would fill the seat of the late Justice Antonin Scalia. And if his past record is any indication, the jurist could tip the ideological balance of the court in favor of gun control.

Since 2013, Garland has been chief judge of the U.S. Court of Appeals for the D.C. Circuit.

The conservative Judicial Crisis Network describes Garland, who the Senate did not confirm until 1997, as “a reliable fifth vote for a laundry list of extreme liberal priorities like gutting the Second Amendment.”

Also as an appeals court judge, Garland voted in 2007 to reverse a D.C. Circuit Court decision that struck down Washington’s handgun ban as unconstitutional. At the time, pro-gun commentator Dave Kopel wrote that Garland’s vote came as “no surprise” because the jurist already had “signaled [his] strong hostility to gun owner rights.”

When the case eventually came before the Supreme Court in 2008, the justices ruled definitively that citizens possess a fundamental right to own guns for lawful purposes.

Carrie Severino, chief counsel for the Judicial Crisis Network, noted in National Review that if Garland had successfully kept the case in lower court, “there’s a good chance that the Supreme Court wouldn’t have had a chance to protect the individual right to bear arms for several more years.”

In the 5-4 decision in District of Columbia v. Heller, Scalia cast the deciding vote and wrote the majority decision.

The NRA argued that the administration was illegally abusing the National Instant Criminal Background Check System by holding records of gun sales for six months.

Obama’s nomination of Garland, 63, is likely meant to bring pressure against Senate Republicans who are vowing to block confirmation of any nominee to the Supreme Court until a new  president takes office in January. In 1997, the Senate voted 76-23 to confirm Garland to the appeals court.

Obama repeatedly has promised to do everything in his power to enact “commonsense gun reforms.” In 2013, the president pledged to “bring about meaningful changes that reduce gun violence” and promised that “even without Congress, my administration will keep doing everything it can” on that front.