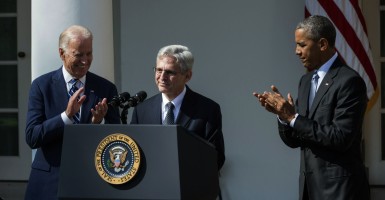 Standing in the Rose Garden this morning, President Barack Obama concluded his speech in typical condescending fashion: “I have fulfilled my constitutional duty. Now it’s time for the Senate to do theirs.”

The former constitutional law professor should know better. As The Heritage Foundation’s authoritative “Guide to the Constitution” explains, “the president has complete discretion in the use of his veto power, the Senate has complete and final discretion in whether to accept or approve a nomination.”

Indeed, the brightest legal mind in the Senate today made clear senators have already acted:

My colleagues and I on Judiciary Committee have already given our advice & consent on #SCOTUSnominee: We won’t have any hearings or votes.

There has not been a Supreme Court nomination and confirmation this close to a presidential election since 1916, and Senate Republicans deserve credit for using their “advice and consent” authority to ensure the American people’s voices are not ignored as they are in the process of selecting their next president.

Equally important to understand though is that Judge Merrick Garland is the type of nominee a Republican-controlled Senate exists to block.

Prior to his nomination, the liberal Think Progress suggested that “Garland would side with the Supreme Court’s liberal bloc in divided cases.” That means that cases previously decided by a narrow 5-4 conservative majority would go the other way.

For example, a Supreme Court with Garland would very likely overturn District of Columbia v. Heller (2008), which found the Second Amendment guarantees an individual’s right to keep and bear arms.

A liberal majority of Ginsburg, Breyer, Sonia Sotomayor, Elena Kagan and Garland (who has been hostile to gun rights in the past) would no doubt agree.

Given the right case, they could effectively destroy the Second Amendment as it exists today for most Americans. The stakes are too high to deprive the American people of their say as to who should fill this critical position, but everyone must understand the consequences of settling for someone less than Justice Antonin Scalia.

Scalia was frequently a deciding vote in critically important cases—particularly those involving fundamental constitutional rights such as free speech, religious liberty, and the keeping and bearing of arms—and our nation cannot afford to lose more rights to whims of an activist court.